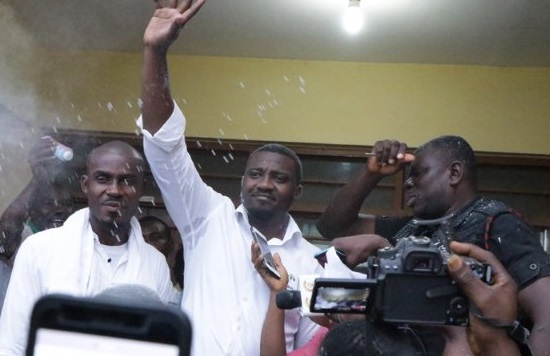 National Democratic Congress (NDC) parliamentary candidate for the Ayawaso West Wuogon constituency, John Dumelo says he was underrated by many people ahead of the parties primaries but he was working hard behind the scenes to achieve victory.

He said his hidden interactions with party delegates to sell his message to them resulted in his massive victory in the recent parliamentary primaries.

Dumelo says it was a deliberate attempt from him not to publicize his community engagements and meetings with delegates to impress upon them to make him the party’s choice for the constituency into the 2020 parliamentary elections.

Speaking on The Point of View on Citi TV, he said the decision left many being uncertain about his chances in the poll as others underrated him.

“Since the by-elections which I didn’t contest in, I have been doing a lot of work on the ground and so that amounted to the 88% [victory]…I think so [I was underrated]. And the good thing that I did was that most of the political stuff that I did, I did not put it on social media because that is not what is important,” he said.

“What is important is the one-on-one dialogue with the delegates which I was doing, and so that is why people were thinking whether I was contesting or not. When you go to the delegates and you speak their language, they will understand you and they will vote for you,” he noted.

At the end of the polls on Saturday, John Dumelo got 758 votes while his only contender, Madam Adoboe managed 99 votes.

A total of 859 delegates voted in the elections with two rejected ballots.

The actor during the National Democratic Congress (Ghana) NDC Party's Campaign In 2016, was one of the most influential and outstanding celebrities who were seen campaigning for the NDC Government.