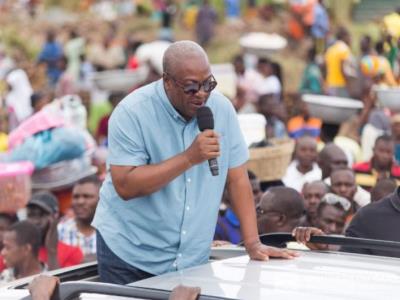 Former President John Mahama says the chaos and the violence that arose in the Volta Region is as a result of politics of divisiveness.

His comments come on the back of some chaos witnessed last Friday when some group of people believed to be a secessionist group violently demanded the independence of Western Togoland.

This has generated lots of talks and many have asked questions on why the group have resorted to violence to get their grievances solved.

John Mahama who has resumed his campaign tour in the Bono Region said the politics of divisiveness is a huge factor in what we are witnessing as a nation.

"In our manifesto, we said job and prosperity for all it means to give every Ghanaian all opportunities available whether you are an Ashanti, Bono, from the North or the Volta Region you must benefit. It should not be just a small group of people benefitting. We always come to participate in voter registration exercise in peace but not this time. Some were killed, others injured and some were told they were foreigners so they won't be allowed to vote. They told some they were Ivorians, Togolese and that only brings divisiveness. Due to that divisiveness, we can all recall what happened recently at Sogakope in the Volta Region. We should be careful, we need a President who will unite the people, this is how Boko Haram started in Nigeria and today they are a force to deal with, this is why God will give the NDC an opportunity to return".

In a separate development, some thirty-one people believed to be members of the Western Togoland group have been hit with five charges by state prosecutors at an Accra Circuit court.

The alleged separatist group in the early hours of Friday blocked major entries into the Volta Region claiming independence as Western Togoland.

Most passengers travelling to areas in the Volta Region including Tefle, Tsopoli, and Juapong were left stranded as a result of the development.

The secessionists also attacked the Aveyime and Mepe Police Stations in the North Tongu District of the Volta Region.

The group of armed men, numbering about 50, in the early hours of Friday forcibly took over both stations simultaneously; overpowering the police officers and making away with the weapons in the armoury.

The group at Mepe after hoisting a Western Togoland flag joined their colleagues at the Aveyime Police Station, seized two police vehicles, held three officers including the Police Chief hostage and injured one.

Doctors who first attended to a police chief caught up in the revolt by secessionist group on Friday have revealed that they retrieved 19 pellets of D B bullet from the body.

Meanwhile, the government has distanced itself from the attacks by members of Western Togoland secessionists engaged in a revolt on Friday in parts of the Volta Region.

The Information Minister said claims that the occurrence is part of a ploy by the Akufo-Addo-led administration to unnecessarily heighten security presence in the Region are figments of some people’s imagination.

However, the Communications Officer of the National Democratic Congress (NDC) has called for an independent investigation into the attack of some police stations by suspected members of the group.

Sammy Gyamfi said the government is complicit considering its failure to nip their activities in the bud as the police claim to have had intelligence.