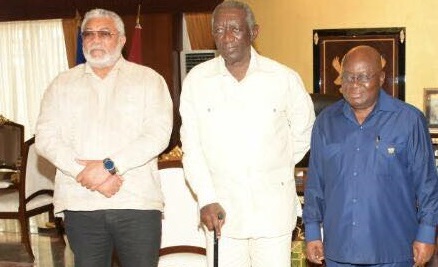 Former President Kufuor says it is good to see founder of the National Democratic Congress (NDC) Ex-President Jerry John Rawlings having a cordial relationship with the current NPP government.

His fondness for Akufo-Addo and his government seems to be increasing on a daily basis to the displeasure of members of his opposition National Democratic Congress (NDC).

This, ex-President Kufuor believes is a good thing because human beings change their perception from time to time.

" As a human being you change from time to time, you can't always hit your head against a brick wall, you will break your neck".

Rawlings on countless occasions has showered praises on Akufo-Addo which many question the seemingly cordial relationship between the two leaders despite their differences in political ideology.

Read also: I respect Prez. Akufo-Addo for his principles and values- Rawlings