Cut down the size of your gov't - Mahama tells Akufo-Addo 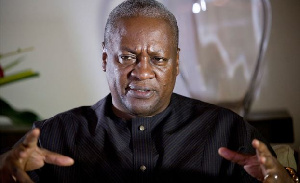 The flagbearer of the opposition National Democratic Congress (NDC), John Dramani Mahama says some government appointees of the Akufo-Addo led administration are 'unnecessary charge on the public purse'.

The former President challenged President Akufo-Addo to immediately cut the size of his government by about 40 Ministers and Deputy Ministers.

According to Mahama, this will bring efficiency by reducing government expenditure and help balance the budget.

Mr Mahama, however, said the reduction of the number of Ministers will make no difference to the already lacklustre performance of the Akufo-Addo administration.

Speaking during a closed-door meeting with some business owners and importers in his office on Monday, 19 August 2019, the former President noted, in reaction to concerns about the government’s increasing budget that, “there can be no justification for some of the ministerial portfolios created by this administration.”

John Mahama also argued that with the completion of the creation of new regions, the Ministry for Regional Reorganisation has been rendered redundant.

Mr Mahama further called for the reduction in the number of ministers responsible for Security.

He described as ''unconscionable'' the appointment of over 60 Deputy Ministers and pledged to drastically cut the size of government if Ghanaians give him their mandate to serve a second term.