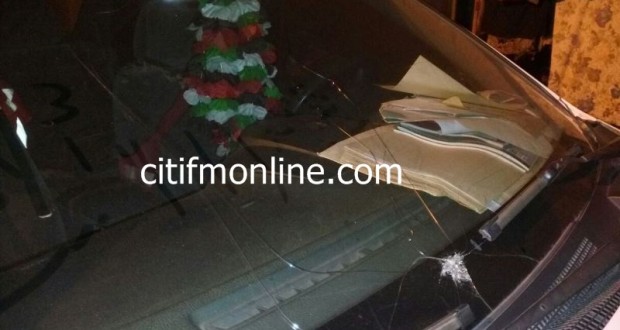 The Ashaiman Constituency Chairman of the National Democratic Congress (NDC), Alhaji Shadad Omar Jallo,  appealed to the hierarchy to provide adequate security for party executives as the November 7 polls get closer.

His call comes after he escaped unhurt after being attacked by machete-wielding young on Tuesday at Community 22 near Ashaiman.

Recounting the incident on Citi FM , Alhaji Jallo said on his way home around 8pm on Tuesday, he saw two motor bikes moving behind him but thought they were probably party loyalists who were beckoning him to stop.

After slowing down to attend to them,  three young men wielding machetes got off the motorbike  and one of the windscreen with the machete while the another smashed the bonnet as they approached me behind the steer at which time he sped off.

“The people chased me until I branched to the police checkpoint”, and the police chased them but could not arrest any of them., he further narrated.

He said he has since lodged a complaint with the Ashaiman Lebanon Police Station.

Alhaji Jallo appealed to the Ashaiman Municipal Assembly to as a matter of urgency fix the street lights at the Community 22 area since it has become a safe haven for criminals.