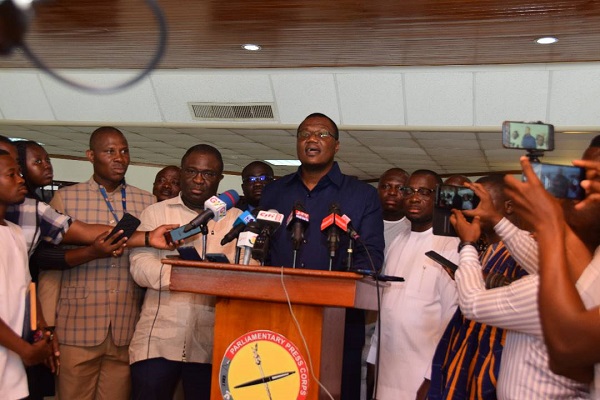 The New Patriotic Party Members of Parliament who called for the removal of Finance Minister Ken Ofori-Atta have stated that they will not back the Minority’s vote of censure against the underfire Minister.

Speaking at a press conference in Parliament today, the MP for Effiduase/Asokore, Dr Ayew Afriyie, said the Majority’s decision was based on the fact that the Minority’s motion was based on “false allegations and charges”.

The leadership of the New Patriotic Party in a statement on Wednesday directed the Majority Caucus to abstain from the scheduled vote of censure being sought by the Minority Caucus against Ofori-Atta.

The governing party believes the vote of censure is “ill-intended and aimed at derailing government’s efforts at resolving current socio-economic upheavals.”

The National Democratic Congress (NDC) MPs have accused the Finance Minister of acting outside the powers of the office and largely blaming him for the country’s current economic woes.

The NDC who had initiated the push for the resignation of the Finance Minister is expected to move a motion for the passage of a vote of censure against Ofori-Atta today, November 10, 2022.

The debate and vote on the censure motion today follows the expiration of the seven-day notice the constitution mandates.

Meanwhile, the Minority have been encouraging all of its members to be present in the process expecting parts of the Majority to join the vote against the Finance Minister.

They initiated the process in October citing mismanagement of the economy, alleged withdrawals from the Consolidated Fund, illegal payment of oil revenues into offshore accounts among other reasons.

However, the leadership of NPP have asked its lawmakers not to join in the vote for the removal of Ofori-Atta.