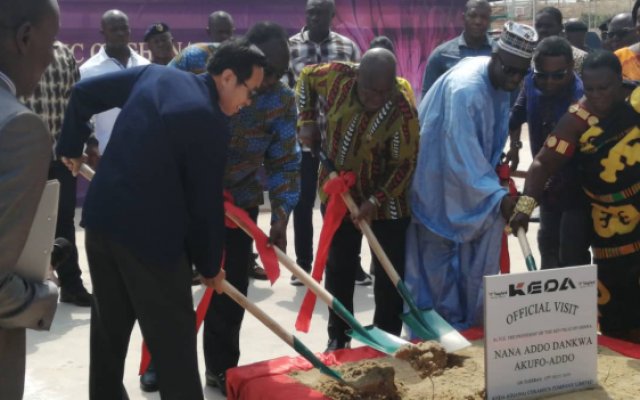 President Akufo-Addo is continuing his tour and has today July 23, 2019, cut sod for the second phase of expansion work of KEDA Ceramics Company Limited, a tile manufacturing company in Aboadze, in the Shama District of the Western Region.

The expansion of the company is to enable them meet local and export demands for tiles.

Total investments made by far for the first and second phase of the project amounts to $77.3million and would result in a substantial decline of about 40% of tiles import into the country. The phase two of the factory is expected to commence full operations by September this year.

President Akufo-Addo took the opportunity to commend the KEDA ceramics for supporting the government’s drive towards industrialisation at the commissioning ceremony.

Mr Lorry Li who is the Managing Director for KEDA Ceramics Company Limited hinted that some 2000 direct and 3000 indirect jobs would be created along with this investment.

He further stated that the company is striving to transform its operational area into an industrial hub to support optimum production capacity, newer products, and technology transfer.

Alan Kojo Kyerematen who is Minister for trade and industry also charged the company to explore the US and EU markets given that some incentives are available to support it.

The second phase of the company is expected to be completed in September.