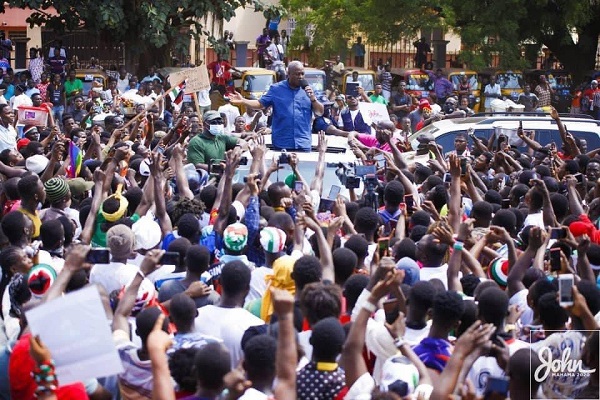 Mahama during a tour in Berekum
Shares

The President says he is confident the New Patriotic Party (NPP) would record a massive victory in 2020 than they did in 2016.

This he says is because of Mahama's poor record and the NPP's works that have been done since they took office.

Speaking on Hello FM in Kumasi was asked if the large crowds that have characterised Mahama's tours scare him but he indicated that he is not moved because he saw a larger crowd in 2016.

"We are going to win this election big time. It is obvious from our works and the reception we are getting across the country. We are going to win based on our record and we have against us someone whose record is very poor. He is probably the worse in our record. I am not scared at all by the crowd following him because there were bigger crowds in 2016 but we all know what happened".

During Akufo-Addo's tour in the Ashanti Region the Asantehene, Otumfuo Osei Tutu II, him that Asanteman will remember his good works come December 7.

He also thanked him for his continuous visit to Manhyia, both as an opposition leader before the 2016 elections and as President of the Republic.

To this end, he stated that “Your good works in office will speak for you going forward into the election. We, in Asanteman, remember, we do not forget. Asanteman will, therefore, remember your good works on election day. All I can offer you is prayers and blessings.”

Even though Chiefs and traditional rulers are not to engage in partisan politics vote, the Asante noted that “we vote. We will vote based on the good works of the candidate.”

Otumfuo Osei Tutu II, thus, urged President Akufo-Addo to direct his communicators and information dissemination machinery to “tell Ghanaians exactly what his Government has done and what is being done” in their respective communities, in the run-up to the December elections.

The President is currently in the Eastern Region to continue his tour.