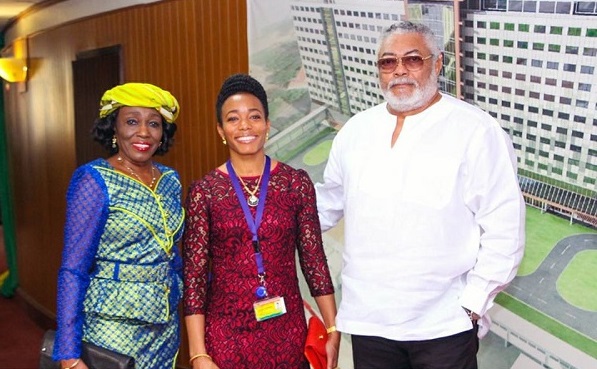 Former President Rawlings, Founder of the National Democratic Congress, NDC has stated that his daughter Dr. Zanetor Rawlings chose to join the NDC over her mother's party, the NDP to run as Member of Parliament for the for Klottey-Korley Constituency.

Nana Konadu Agyeman Rawlings wife of former President Rawlings is the founder and flagbearer of the National Democratic Party (NDP) and she contested for President in 2016.

JJ Rawlings, in an interview with Kwaku Sakyi Addo on Asaase FM, explained that he never influenced Zanetor's decision to join the NDC, Mr Rawlings says that was her personal decision.

"I have a confession, during 2016 I voted for my wife Nana Konadu Agyeman Rawlings, she deserved my support. For the 2020 elections whether I will vote for her or not I won't say it. As for my daughter Zanetor Rawlings I gave her the chance to decide which party she wants to join, she decided against joining her mother's party. I am really proud of her, even though she is a medical doctor, she has decided to delve into politics to ensure people are safe.

Zanetor Rawlings beat lawyer Addison to win the seat but  will be challenged in this year's election by NPP's Prince Appiah Debrah a.k.a “Osu boy”.

Former First Lady Nana Konadu Agyeman Rawlings broke away from the NDC to form the NDC after losing to late Prof John Evans Atta Mills in the NDC congress in 2011.

In the December 2016 presidential elections, Agyemang-Rawlings polled 16,935 of the valid votes cast which represented 0.16%.

This year's Presidential election is seen as a two-horse race between NPP and the NDC and is expected to be a tight one.

President Akufo-Addo and Dr Mahamudu Bawumia will be coming up against former President John Mahama and his running mate Prof. Naana Jane Opoku-Agyemang.