Man helps new mom get stroller into tram, returns home and sees her in his kids' room — Story of the day 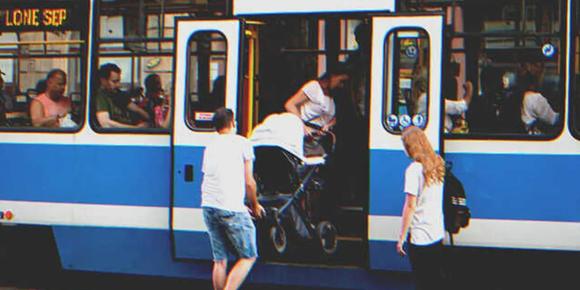 A man returning home from a job interview helped a frantic mom get a stroller into a crowded tram. The following day, he was surprised to see the same woman in his home, taking care of his kids inside their room with a smile on her face.

Kevin was returning home from a successful job interview that he couldn't wait to tell his children about. He got on a busy tram, which was slowly making its way through several stops before it reached his neighborhood.

Halfway through the trip home, Kevin noticed a struggling mom carrying a stroller up the tram with her small baby in her arms. Seeing that nobody else offered to help her, he got up from his seat and assisted her in bringing the stroller inside.

"Thank you so much," the woman said with an apologetic look on her face. Her hair was messy, and she looked tired from tugging the stroller around.

"Rough day?" Kevin said, offering her his seat on the tram. The woman nodded her head.

"Yeah. This little one couldn't sleep at home, so I walked her. I'm too tired to walk back home, so here we are on the tram. I'm Cynthia, by the way. Thank you for giving up your seat for me," the woman said.

"Ah, the newborn stage." Kevin sighed. "We have to do everything to get them to sleep... I'm Kevin." He smiled, reminiscing his kids' newborn stages.

"You're a dad? How old are your kids?" Cynthia asked him.

"Yup, proud single dad to three little girls," he told her, holding up his phone screen to show his three kids on his home screen.

"You have such lovely girls," Cynthia smiled. "Who do you leave your kids with?" she asked curiously.

"I leave them with my neighbor. She is a bit deaf, so thankfully, their screams don't annoy her so much. I just got a job downtown, so I might have to leave them there more often," Kevin revealed.

Cynthia nodded. "Do you live in this neighborhood? I think we might be neighbors."

"I do. I live on Sixth Street, just another stop away. How about you?" Kevin asked.

"Sixth Street! Your neighbor must be Mrs. Barrymore! She is my grandmother's best friend. I miss her. I should visit her soon. I live on Eighth Street," Cynthia smiled.

Before Kevin and Cynthia could talk some more, it was already Kevin's stop. He waved her goodbye and wished her luck on her motherhood journey.

The following day, when Kevin returned home from his new job, he saw Mrs. Barrymore sitting alone in his living room. "Mrs. Barrymore!" Kevin said, surprised. "Where are the kids?"

Mrs. Barrymore smiled and gestured towards the kids' room. Kevin rushed to their room, thinking the kids were alone inside.

Instead, he saw Cynthia carrying his three-year-old daughter Sophia in her arms. They were playing, with Cynthia swinging the little girl around in the air. Sophia was smiling from ear to ear while his other kids were busy drawing.

"Cynthia? What a surprise! What are you doing here?" asked Kevin.

Cynthia smiled and told him that she had decided to visit Mrs. Barrymore and the kids. "I wanted to see how I could help," she said.

Mrs. Barrymore told Kevin that Cynthia helped clean the house, do the laundry, bathe the girls, and even cooked dinner for all of them.

"What? Why?" Kevin asked, surprised. "You didn't have to do any of that. I'm quite embarrassed, to tell you the truth," he admitted.

Cynthia shook her head. "It's nothing, Kevin. It's the least I could do for what you did for me yesterday. To be honest, I was on the brink of fainting when I was boarding the tram. I was exhausted! If it weren't for you, I don't know what would have happened to my son and me," she explained.

"Thank you so much," Kevin said, giving Cynthia a friendly hug. "You have no idea how much I appreciate this. I've been running behind on the household chores."

"The goodness you put out to the world will always find its way back to you," Cynthia replied with a smile.

What can we learn from this story?

The goodness you put out into the world will always find its way back to you. Kevin helped Cynthia without expecting anything in return, but Cynthia made sure to repay his kindness by taking care of his children the next day.