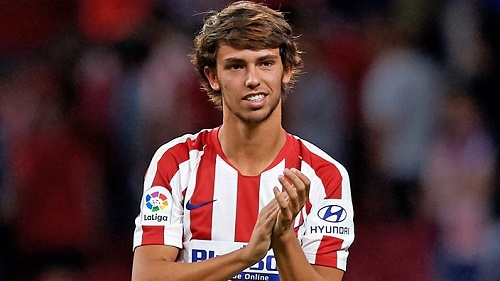 Atletico Madrid midfielder Joao Felix has been named the 2019 Golden Boy, after a strong start to his career at Wanda Metropolitano.

Felix joined Atletico for £113 million ($146m) back in July, after rising through the ranks at Benfica over the previous five years.

The 20-year-old contributed 15 goals and seven assists to Benfica's cause last season, and has picked up from where he left off at the start of the 2019-20 campaign in Spain.

Felix has been a standout performer for Atletico, racking up 13 appearances across all competitions in total and scoring three goals.

Felix has joined a prestigious list of past winners which includes Lionel Messi, Paul Pogba and Kylian Mbappe, with last year's award given to Juventus defender Matthijs de Ligt.

He expressed his delight after receiving the Tuttosport distributed prize on Wednesday morning and paid tribute to Benfica head coach Bruno Lage for the key role he has played in his development.

Felix told Tuttosport: "Thanks to Tuttosport for the Golden Boy Award 2019, I am very proud.

"It is the second time that a player from Atletico Madrid has won this award and I am happy.

"Thanks also to Benfica, in particular to coach Bruno Lage for all he has done for me and my family that is always close to me."

Sancho finished second in the final voting for the highly-coveted individual accolade, after helping Dortmund fight for the Bundesliga title last term while also earning his first caps for England's national team.

Bayer Leverkusen playmaker Kai Havertz came in third, one spot ahead of Haaland, who has earned plenty of plaudits for his goalscoring exploits in the Champions League with Salzburg.

De Ligt ended up fifth, while Barcelona and Manchester City teenagers Ansu Fati and Phil Foden secured sixth and seventh respectively, with the latter the Premier League's sole representative in the top 10.

Felix continued his comeback from an ankle injury by coming on as a second-half substitute during Atletico's 1-0 defeat at Juventus in the Champions League on Tuesday night.

The Portugal international will likely be back in contention for a starting spot when Diego Simeone's team take on Barcelona in La Liga on Sunday.