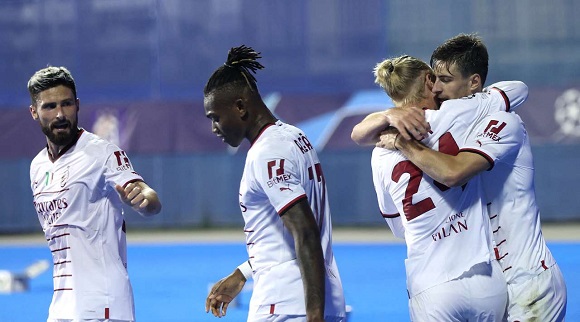 AC Milan put one foot in the Champions League knockout with a comfortable victory against Dinamo Zagreb on Tuesday night.

Matteo Gabbia, Rafael Leao and Oliver Giroud all got on the scoresheet before an unfortunate Robert Ljubicic own-goal rounded off a comfortable 4-0 win for the Italians.

With the stakes so high for both teams, the majority of the first half was played similarly to a chess match; cagey.

Ante Rebic found himself in acres of space in the Zagreb penalty area before squandering the best chance of the opening period.

With the ball at his feet in front of goal - instead of pulling the trigger quickly - he tried to weave around the outside of the two defenders between him and the goal, but was too slow in doing so and had his low shot blocked.

Milan gradually grew into the game after a cautious start, and opened the scoring through Gabbia. He made a clever run to meet a wonderful Sandro Tonali free-kick to guide a smart header beyond Dominik Livakovic and into the bottom left corner.

Despite a slow start, Milan took control of the game after 49 minutes when Leao drove into the Zagreb penalty box and finished smartly at the near post to double the visitors lead.

Giroud dispatched a penalty on the hour mark to put the game to bed after Ljubicic brought down Tonali, and the latter was on the end of an unfortunate incident ten minutes later when he scored an own goal to make it four.

Ljubicic was in the wrong place at the wrong time as a Leao cross ricocheted off Giroud in the box, popped up, and diverted into the goal via the defender.

Milan had the chances to stretch their lead to five or six, but a spirited second half showing from Livakovic kept the deficit down.

The result means Milan move up to second in Group E, a point clear of third place Salzburg going into the final round of matches, while Zagreb lie bottom of the table.