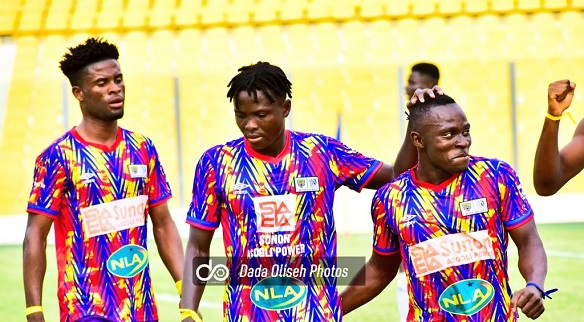 Accra Lions will square off against Accra Hearts of Oak in the Accra derby on matchday 26 of the Ghana Premier League at the Accra Sports stadium today, April 22.

Both clubs head into the match with an eye on the three points having churned out an uncharacteristic and inconsistent performance all season.

Accra Lions recorded their first-ever away win against King Faisal on Sunday. Frederick Asante won the day for the new boys as they beat The Greens 1-0 in Kumasi to condemn the Insha Allah boys to their 7th straight defeat in their last nine outings.

Accra Lions have been overly impressive in their last six matches after winning 4 and losing two in the process with their last defeat coming against Eleven Wonders on April 3, at the Techiman.

They sit in 10th place with 33 points – 5 points away from the bottom three clubs.

Samuel Inkoom scored a perfect free-kick to give Accra Hearts of Oak a 1-0 lead against Elmina Sharks but the Phobians failed to protect that goal as Sharks came from behind to snatch a point in a 1-1 stalemate.

The former Dnipro and FC Basel right back who made his Hearts of Oak bow against former club Asante Kotoko on Sunday, April 10, also featured in the MTN FA Cup quarter final against Skyy FC.

Accra Hearts of Oak 6th in the Premier League table with 37 points have yet to win a Premier League match since April 2, when they defeated Medeama SC 1-0 in Accra.

Their inconsistency can be traced down to the long layoff of Salifu Ibrahim and the misfiring of Kofi Kordzie, Daniel Afriyie Barnie, Patrick Razak and Isaac Mensah.

Experienced midfielder Sulley Muntari who missed the games against Asante Kotoko, Skyy FC and Elmina Sharks is likely to feature on Friday after returning to training this week. The former Inter Milan star player has not played for the Phobians since the win against Medeama.

Midfielder Nurudeen Aziz and defender Caleb Amankwaa will return to the team but Richard Atta is still a doubt due to injury.

The match is scheduled for 3pm kick off at the Accra Sports stadium on Friday, April 22, 2022 and broadcast live on StarTimes Adepa channel 247