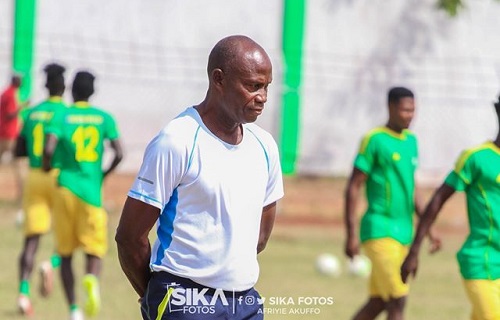 Aduana Stars coach W.O. Tandoh has blasted journalists for not attaching 'defending champions' to his outfit name when it is being pronounced.

According to Tandoh, despite being the current holders of the title the media is not giving the Dormaa based side the recognition they deserve.

Speaking to the media after Aduana Stars goalless stalemate against Hearts of Oak, Tandoh descended heavily on the media for being biased towards his outfit.

"The journalist in this country look bias towards Aduana Stars, why I am I saying so, Aduana is the league champions, we are the defending champions.''

When have you heard on any media platform that a team is going to play against the defending champions, but rather you will ridicule Aduana and think about Hearts and Kotoko and you are uplifting them. Are they better than Aduana? No, they are older than us.

Aduana Stars are two-time champions of the Ghana Premier League. They clinched their first in the 2009/10 and the second in 2017/20 season.