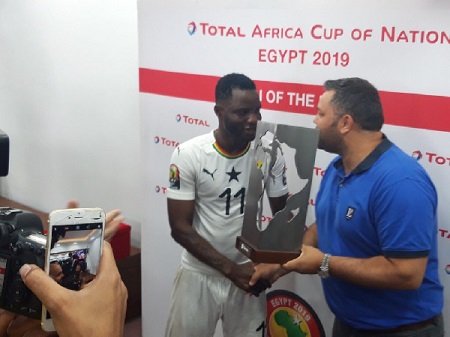 Deportivo Alaves midfielder Mubarak Wakaso was named the Man-of-the-Match during Black Stars 2-0 win over Guinea-Bissau in the final game of Group F at the ongoing Africa Cup of Nations.

The midfielder was at his best delivering an energetic performance following Black Stars win over the Djurtus with Jordan Ayew and Thomas Partey scoring on the night.

In his postmatch interview, Wakaso thanked his teammates for the collective effort they showed in seeing off Guinea-Bissau as he became the second Ghanaian to pick the award at this year’s tournament after Jordan Ayew.

“First of all I need to thank my teammates, the whole Ghana and my fans for the support and prayers,” Wakaso told reporters after receiving the award.