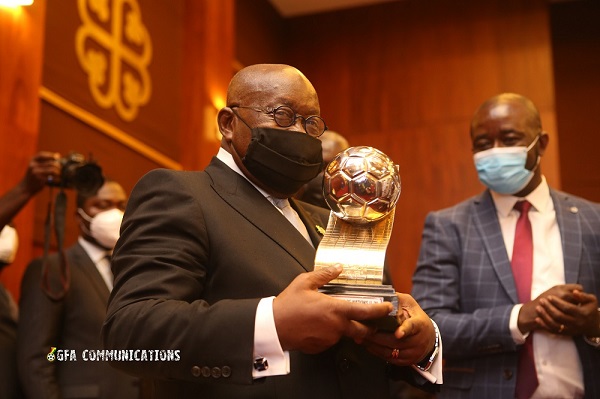 President Akufo-Addo wants the Black Stars to win the 33rd edition of the Africa Cup of Nations, AFCON to be staged in Cameroon, next year.

This is the second time the President has tasked the Black Stars to bring smiles to the faces of Ghanaians after the failed "Presidential Project" in 2019.

“The target is to bring the cup home by winning the AFCON 2022. We must go a step further than our second-place finishes in 1992, 2010 and 2015 and end the 40-year drought for a title,” Akufo-Addo said at a special breakfast meeting at the Jubilee House on Monday.

Ahead of AFCON 2019, The then GFA Normalization Committee chairman, Dr Kofi Amoah revealed that the Akufo-Addo charged the Black Stars to end the country's long wait for an African title.

In an interview with Asempa FM,  Dr Kofi Amoah disclosed what transpired at the meeting which involved the Black Stars captain and his deputy, coach Kwesi Appiah and others.

"The President wondered why for 35 years Ghana has not able to lift the AFCON trophy, something must be wrong, so he called his key people to find out why''?

''He welcomed all suggestions and tasked the players and the technical handlers to do their possible best to lift the trophy that has eluded Ghana since 1982".

Next year will be 40 years since the Black Stars last lifted the Afcon trophy. They defeated host nation Libya to win the tournament in 1982 and since then, they have suffered three final heartbreaks.

The 33rd edition of AFCON tournament will take place from 9 January to 6 February 2022.