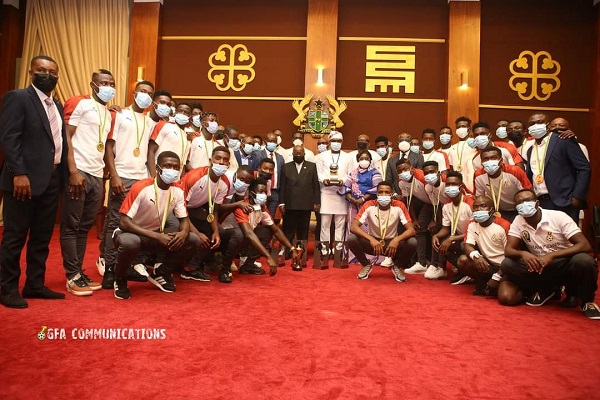 President Akufo-Addo has urged players of the Black Satellites not to let their guard downÂ as they hope to make the call up to the Senior National Team, the Black Stars.

He gave this piece of advise to the current U-20 ChampionsÂ at the Jubilee House when the team visited him there.Â

The PresidentÂ further urged the players to feel proud when given the nod to wear the nation colours.Â

"I want all of you to be very proud of playing for Ghana and be prepared to step up any time you are selected to play for Ghana and more importantly to prepare yourselves to be part of the Black Stars down the road," Akufo-Addo said.

At the ceremony,Â Tuesday, March 9, Akufo-Addo announced a whopping $10,000 package for each of the 27 players who played at the tournament and nine technical team members, amounting to $330,000.

READ ALSO:Â SONA2021: May your success be the beginning of a new era for Ghana football - Akufo-Addo to Champions Black Satellites

Each playing member is entitled to $5,000 in cash and an investment facility in the form of a bond worth $5,000 which will mature in 10 yearsâ€™ time.

In addition to this,Â the first gentleman of the land made a personal pledge of $5,000 each to goalkeeper Danlad Ibrahim, captain Afriyie Barnieh, overall best player Fatawu Issahaku and Head coach Karim Zito.

Ghana beat Uganda 2-0 in the final to win a record fourth African title on Saturday, March 6, 2021 at the Olympics stadium in Nouakchott, Mauritania.