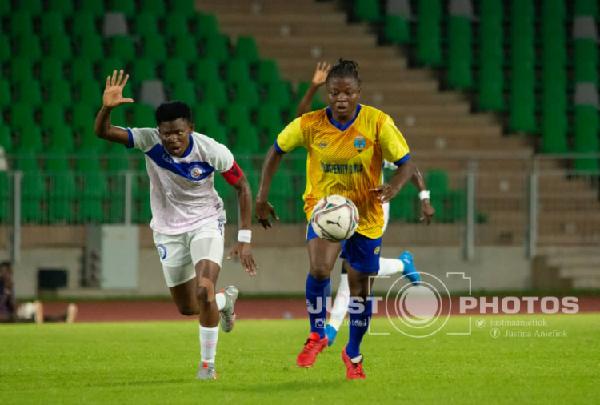 Ghana will have no representative at the 2022 CAF Women's Champions League following Ampem Darkoa Ladies' defeat to Bayelsa Queens of Nigeria in the finals of WAFU Zone B Champions League qualifiers.

The reigning Ghana Women's Premier League and FA Cup champions Ampem Darkoa Ladies failed to secure a ticket to the next edition of the CAF Women's Champions League after a heavy loss to Bayelsa Queens in the final at Stade Yamoussoukro, Ivory Coast on Saturday evening.

The Nigerian champions inflicted a 3-0 painful defeat on Ampem Darkoa Ladies to book themselves a slot in the 2022 CAF Women's Champions League to represent their country for the first time.

It would be recalled that Hasaacas Ladies defeated Rivers Angels of Nigeria to qualify to the maiden edition of the tournament in Morocco last year.

However, Bayelsa Queens revenged for the Green and White nation by whipping the Techiman-based outfit to make a maiden appearance at the tournament which will be held from October to November 2022 in Morocco.

Bayelsa Queens unsettled the ‘Nanamma’ lads with two early goals before the half-hour mark through Miracle Joseph and Flourish Sebasstine.

Ampem Darkoa Ladies failed to warm themselves into the fixture after conceding an early penalty which was neatly converted by Miracle Joseph on the 11th minute of the game.

In the 22nd minute, Flourish Sebasstine extended the lead for the Nigerian champions with a brilliant strike before Chinyere Igbomalu completed their famous win with her strike on the stroke of halftime.

The second half was barren as both sides failed to make the few chances created and set-pieces awarded to them count after the break.

Bayelsa Queens enjoyed majority of the game possession in both halves but failed to exercise their attacking muscles in the second half as the game ended in 3-0 for them.

Bayelsa Queens will be representing Nigeria at the 2022 CAF Women's Champions League from October to November in Morocco.