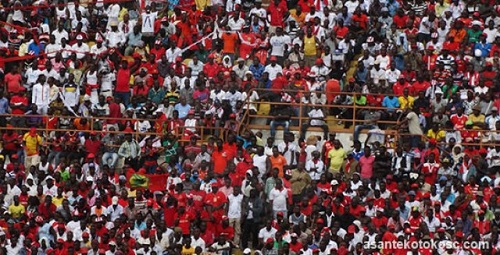 Ghana Premier League giants Asante Kotoko are set to form a Task Force to assist the club arrest fans who get involved in crowd violence, according to National Circles Council chairman Christopher Demenya

A fan was hit by a bullet by the Police after the Porcupines 1-0 defeat to Berekum Chelsea at the Baba Yara Stadium on Sunday.

Before, there had been a confrontation between Kotoko fans and security during the match. The fans, unhappy with some refereeing decisions, started throwing bottles and sachets of water onto the field. This halted the game for several minutes towards the end.

The GFA condemned the incident which occurred on Sunday and on Tuesday slapped Kotoko with a Stadium ban.

A statement from the GFA read: Following incidents at the Baba Yara Stadium during Asante Kotoko's Premier League match with Berekum Chelsea on Sunday, the GFA Executive Council has decided to temporarily ban Asante Kotoko from playing its matches at the Baba Yara Sports Stadium pending the adjudication of the matter by the GFA Disciplinary Committee.

Reacting to Sunday's incident and the subsequent Stadium ban on the Porcupines, Christopher Demenya confirmed that a Task Force will be formed.

Yes, we will force a task force because soo many people are wearing the Kotoko jersey and they are not the club's supporters.

Because I don't believe a true fan of Kotoko will be involved in crowd violence, he told Angel FM.

READ ALSO: We find it difficult to accept the behaviour of the Police officer - Asante Kotoko