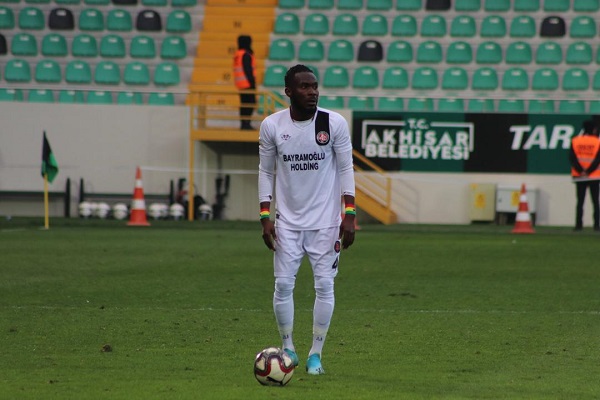 Ghana central midfielder/defender Joseph Attamah Larweh had a great game as he guided his side Karagumruk to a 2-2 draw against Adana Demirspor in the Turkish 1. Lig.

A 12th-minute strike from Chilean midfielder Jorquera Cristobal gave Karagumruk the lead which they protected till half time.

After the recess, Mehmet Akyuz struck twice to give Adana Demirspor the lead.

Jorquera Cristobal also got his second of the day in the 69th minute as the game ended two-all.

The Black Stars player who joined Karagumruk in January on loan from Istanbul Basaksehir started the game as a defensive midfielder.

He lasted the entire 90 minutes of the game.

Ever since Karagumruk signed the versatile Ghanaian midfielder in January they have not lost a game.

Out of their eight matches played, they have won 4 and drawn 4. The team that sat 12th on the league table have now jumped to 6th and are on course to qualify to the Turkish Super Lig.

Attamah has been brilliant for the side and it is only a matter of time when top clubs circle him for his signature.