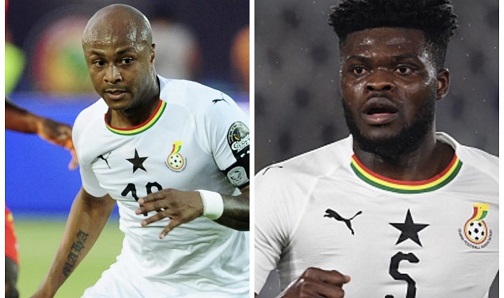 Black Stars head coach Charles Kwablan Akonnor has named his captain and two deputies as he bids to win the 2021 Africa Cup of Nations tournament and qualify the Black Stars to the World Cup in 2022.

According to the coach, Andre Ayew remains his captain while Thomas Teye Partey and Richard Ofori are his 1st and 2nd Vice-Captain respectively.

A statement from the GFA on Sunday, September 13 read: The Technical team of the senior national team, the Black Stars, upon a broad consultation, has maintained Andre Ayew as Captain of the side.

The Swansea City attacker who led Ghana to the 2019 Africa Cup of Nations in Egypt, maintains his position as leader of the team despite changes at the technical realm of the senior national team.

In a related development, Thomas Teye Partey of Atletico Madrid has been appointed as 1st Vice-Captain while Richard Ofori steps in as 2nd Vice-Captain.

The trio will lead the team as the Black Stars go through the remaining Africa Cup of Nation qualifiers as well as the qualifying games for the 2022 FIFA World Cup in Qatar and subsequent tournaments.

Reacting to the new leadership under CK Akonnor, the former Borussia Dortmund player said Dede Ayew’s position as a Captain has never been in doubt looking at leadership qualities at the last AFCON.

“Dede’s position as a Captain has never been in doubt. He has been one of the oldest member in the team and looking at his personality, he depicts a true captain of the national team.”

“Thomas Partey has also captained the team before leading the team to win away at Congo. So clearly it’s not out of place to give those two as deputy captains.” Augustine Arhinful said.

The Asogli State in the Volta Region, have stated their readiness to deploy…