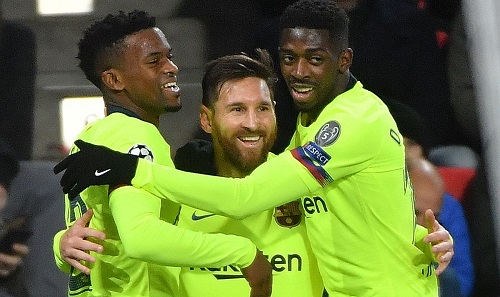 Barcelona president Josep Bartomeu has revealed which stars will not be sold this summer as the crisis club looks to rebuild.

Bartomeu, who has refused to resign from his position, gave a lengthy interview to Barcelona TV and outlined how the Catalan side are planning a massive squad revamp.

Crucially, incoming manager Ronald Koeman sees Lionel Messi as a key part of the project so his inclusion is a given, but there are eight players in total seen as integral who will not be allowed to leave.

Following the loss of the LaLiga title to fierce rivals Real Madrid and the abject 8-2 defeat by Bayern Munich in the Champions League quarter-final, most of the squad are on the chopping block.

READ ALSO: If Messi decides to leave, we have to change Barcelona's name – Eto’o

But Bartomeu said: 'Messi is untouchable & non-transferable. He knows it, we all know it.

'But there are various non-transferable players like (Marc Andre) Ter Stegen, (Clement) Lenglet, (Nelson) Semedo, (Frenkie) De Jong, (Antoine) Griezmann, (Ousmane) Dembele... players we are counting on in the future.'

The 17-year-old sensation Ansu Fati is another name checked by the club president who is seen as a big part of the future.

'We have had (offers) for Ansu Fati, for example,' Bartomeu went on.

'But Barca does not want to sell players, although we receive several offers for players.

'We don't want to sell him. He has a great future. I'm telling you from here, he's non-transferable.'

Philippe Coutinho is returning to the Nou Camp having scored twice against his parent club for Bayern in the quarter-final and the Brazilian playmaker could yet have a part to play next season.

Bartomeu opened the door for the former Liverpool man to stay, saying: 'The head coach will make the decision. If he wants him to continue, next year he will play with us.'

And the 57-year-old went on to state plainly that Messi would not be going anywhere given his utmost importance to the club.

'I have spoken with Koeman and the pillar of our project is Messi,' he said. 'He has a contract until 2021, I speak a lot with Leo and more regularly with his father.

'He is number one in the world. There is no doubt that in Koeman's new project you can count on Messi.'

Koeman will inherit an ageing squad in dire need of a rebuild and is set to take the helm following Quique Setien's sacking. Technical secretary Eric Abidal is another to have been given the boot in the wake of the Bayern humiliation.

Many have called for Bartomeu himself to step down but he said: 'We didn't want to resign, we wanted to do the planning for next season. To resign now would be easy but irresponsible. We have a sporting crisis but not an institutional crisis.'