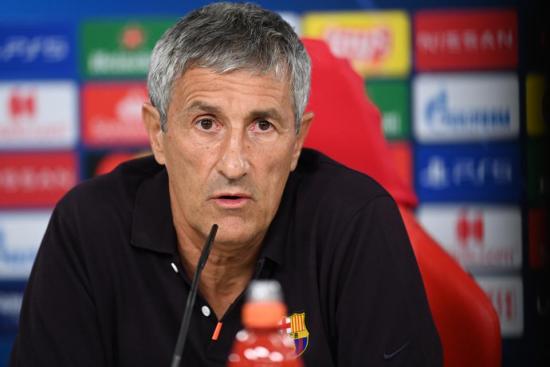 Barcelona have sacked coach Quique Setien and brought presidential elections forward to March 2021, the club said on Monday, three days after the Spanish side were hammered 8-2 by Bayern Munich in the Champions League quarter-finals.

Setien, 61, was appointed in January after the club sacked two-time league winner Ernesto Valverde despite his side sitting top of the La Liga standings on goal difference.

But after Barca were condemned to their heaviest defeat in European competition on Friday, Setien was also sacked after only seven months in charge, after overseeing the club’s first trophy-less season in 12 years.

Barca finished second in La Liga behind champions Real Madrid and were knocked out of the Copa del Rey at the quarter-final stage by Athletic Bilbao.

“This is the first decision within a wider restructuring of the first team which will be agreed between the current technical secretary and the new coach, who will be announced in the coming days,” added Barca’s statement on Setien.

According to widespread Spanish media reports, Netherlands coach and former Barca defender Ronald Koeman is set to be named as Setien’s successor.

The statement, which was released more than nine hours after president Josep Maria Bartomeu and directors had begun a board meeting, also said the club’s hierarchy had decided against calling an election imminently in the wake of the Bayern defeat, as many fans and influential voices had demanded.

“The board understand that an immediate call for elections is not feasible, given that the league season will begin on the weekend of September 12, 2020, and the situation arising from the COVID-19 crisis - both economically and socially,” added the statement.

“Consequently, the club will continue to implement the plan to reverse the sporting and economic situation, based on profound changes to the first team, plus a redefined budget to deal with the new situation caused by COVID-19, before the end of the current mandate.”

As at Real Madrid, Athletic Bilbao and Osasuna, Barcelona presidents are voted for by club members.

Bartomeu won the last election, held in 2015, but is barred from running in the next round of elections as he has already served two consecutive mandates, having been named president in 2014 after the resignation of Sandro Rosell.

Victor Font is the front-runner for the election, while former president Joan Laporta has also declared his intention to run.