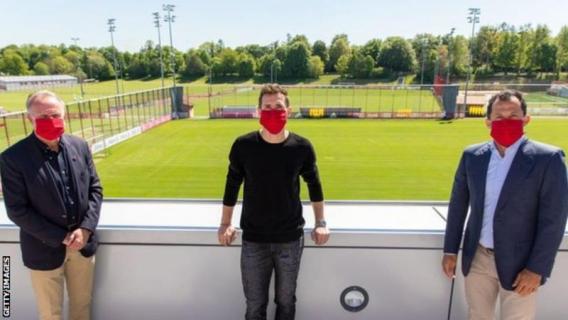 The 41-year-old has signed a one-year deal with the Bundesliga champions and will move into the dugout alongside Flick from July 1.

Klose, who won the 2014 World Cup with Germany and is the top scorer in the history of the competition, had previously been coaching Bayern's Under-17 squad.

Bayern CEO Karl-Heinz Rummenigge said: "We are very happy that Miro decided to take the step from Bayern youth to the professionals. He is the most successful German striker of the past 15 to 20 years. I am convinced that our strikers in particular will benefit from him as a coach. Miro was also Hansi Flick's preferred candidate."

Sporting director Hasan Salihamidzic added: â€œHe was in charge of the U17s for two years, with convincing sporting results and a positive team development. I am convinced that Miro fits very well into the Hansi Flick coaching team and can also become an important contact for our players with his experience and his idea of â€‹â€‹football."

READ ALSO:Â Bundesliga to resume behind closed doors on May 16

Bayern also confirmed that another member of Flick's staff, former RB Leipzig and Southampton coach Danny Rohl, has extended his contract until 2023.

Klose said: â€œIt feels very good, I'm really looking forward to the task. Hansi Flick and I have known each other very well since our years together with the German national team, we trust each other both professionally and personally.

"For me, this is the next step in my career as a coach. I hope that with my experience I can make an important contribution to Bayern achieving its sporting goals."

Flick added: â€œWith his experience as a former professional at the highest international level, Miro is the perfect addition to our team of trainers.

"We have known and valued each other for a long time and have had great success together with the national team. The fact that Rohl will remain with us in the long term is also great news for my team and me."

Klose, who previously played for the Bundesliga champions between 2007 and 2011, had taken charge of Bayern's U17s in 2018 and won the B-Juniors Bundesliga South/Southwest with his team in 2019.