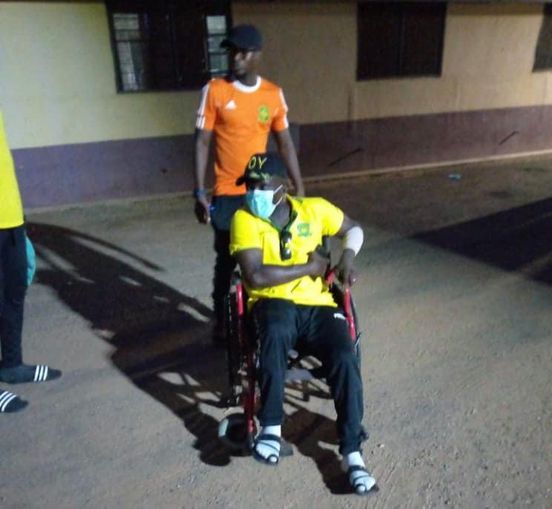 Ernest Thompson Quartey was beaten up by a group ofÂ Berekum Chelsea fans during their 2-1 defeat in the Ghana Premier League for allegedly carrying black magic.

The incident happened after the first half when the visitors were making their way into the dressing room at the Golden City Park with a 1-0 lead.

Dwarfs opened the scoring through Enoch Afram in the 23rd minute but Chelsea stormed back with Kofi Owusu netting the winning goal after 83 minutes.

After the match, Thompson had his shirt torn and had to leave the stadium with his left arm bandage.

He looked stricken as he narrated his ordeal.

â€We played the first match, we said our prayer with the prayers and just as we were going into the dressing room, then about 30 supporters in front of the dressing room. They wanted to search me because they were suspecting I had juju [black magic] on me,â€ Thompson said in a video posted on social media.

â€So when I said No. It was only my phone and other things, they forcibly opened my zip and all that and when I tried to resist, they started punching me, held my leg, I fell down, some were kicking me.

â€This shouldnâ€™t be happening in Ghana football in this day and age. We[Ghana] have come of age, we are in the scientific world to be pummelled, kicked and all that.

â€I have a family at home. I canâ€™t die because of football.â€