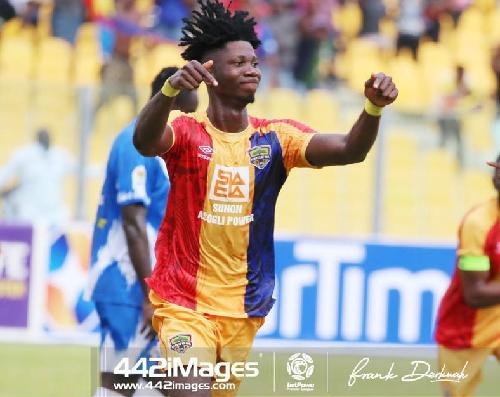 Konadu Yiadom scored on his debut as Accra Hearts of Oak came from behind to snatch a point against Accra Great Olympics on Match Day Two of the betPawa Premier League on Sunday.

The Mantse derby which attracted a large crowed to the Accra Sports stadium lived up to the billing – but Great Olympics failed to consolidate their first half lead as the Phobians forced the game to end in a 1-1 stalemate.

Accra Great Olympics came into the game on the back of a four match unbeaten run against their city rivals and deservedly took the lead through Abdul Razak Yussif in the 6 minute. The Olympics attacker capitalized on a defensive error between captain Mohammed Alhassan and goalkeeper Eric Ofori Antwi before nodding the ball into an empty net for the opener.

Hearts of Oak then took control of the game by creating some decent chances in search of the leveler but efforts from Junior Kaaba, Daniel Afriyie Barnieh and Kwajo Obeng Jnr yielded no result. Samuel Ashie Quaye also had two brilliant chances to increase the tally for Great Olympics but the attacker fumbled twice before Hearts of Oak fetched the equalizer.

Accra Hearts of Oak who came into the game fresh from a 1-0 loss to Aduana FC pushed for the winner but Great Olympics equally dealt with the pressure as they held on to share the spoils in a 1-1 draw.

Elsewhere in Tarkwa – Medeama SC came from a losing position to beat Real Tamale United 3-2 at the Akoon Park. Captain Kwesi Donsu gave the host a deserved lead in the 41 minute before Issah Kuku scored twice inside the first 15 minutes of the second half to put Real Tamale United in the driving seat. Kofi Asmah drew Medeama SC level in the 78 minute before Kwesi Donsu again netted the winner in the 88 minute – his second of the day to give the Tarkwa lads all the spoils.

At the Aliu Mahama stadium in Tamale – Abdul Rahman scored the only goal of the match as Legon Cities pip Tamale City 1-0 to bounce back from last weekend’s opening defeat to Medeama SC.

Ali Huzaif scored in the second half as Dreams FC maintained their perfect start to the season with a 1-0 win against Kotoku Royals at the theatre of Dreams at Dawu. Ali tapped the ball into the net after he was beautifully set up by Dana Blessing in the 70 minute.

Samuel Gyimah and Daniel Awuni scored for Accra Lions in their 2-1 win over Karela United FC on Saturday. Gyimah got on the end of Baba Salifu Apiiga’s cross to head home the opener before Awuni added the second goal four minutes later. Karela United pulled one back in the 61 minute through Enock Agblenyo.

Earlier on Friday, Nsoatreman FC got their season off to flying start as they beat Bibiani Gold Stars 1-0 at home. Samuel Ofori scored the only goal of the game through a second half penalty.