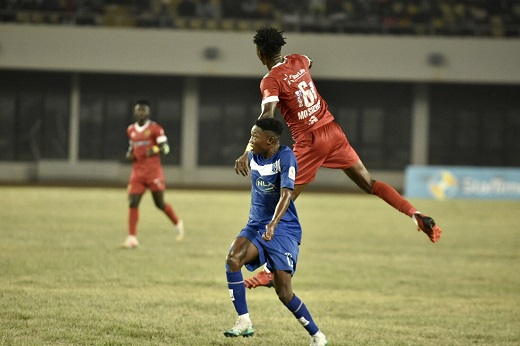 Dreams FC gave away a two-goal lead to draw 2-2 with Accra Hearts of Oak on Matchday 8 of the betPawa Premier League on Sunday.

The Phobians who are on a good run wanted to win the game to improve their position in the League standings whist Dreams FC went into the game with the aim of upsetting their host following two defeats to the host in their last three visits.

David William Van Dijk scored in the 14 minute after Ismael Dede worked his way through the Hearts of Oak backline before laying a pass to Van Dijk to tap home. The Still Believe lads doubled their lead three minutes after the break as he headed home a rebound from a corner kick.

Hearts of Oak who went into the game without their captain Gladson Awako halved the deficit in the 75 minute when Collins Boah scored an own goal after miskicking an attempt over the head of goalkeeper Lord Bawa Martey.

Benjamin Yorke scored the equalizer for Hearts of Oak in added time after coming on a substitute for Rashid Okine in the 80 minute.

The result takes Accra Hearts of Oak to the 5 spot with 13 points – one points behind rivals Asante Kotoko and three adrift of leaders Aduana FC.

Dreams FC thus drops to the relegation zone as they sit in 16 place with 8 points.

In other results, Bibiani Gold Stars shocked Legon Cities 1-0 at the El Wak stadium to hand them their second defeat of the season. Michael Enu scored the only goal of the match to hand the Bibiani lads a valuable win going into the World Cup break.

Samuel Adom Antwi and Abednego Tetteh netted for King Faisal as the Insha Allah guys beat Accra Lions to record their third straight win of the season following victories over Kotoku Royals and Karela United. The Kumasi based club who started the season with five defeats on the spin seem to have found their rhythm at a very crucial time. Frederick Asante pulled one back for Accra Lions in the 69th minute as they lost their second successive game within a space of four days. 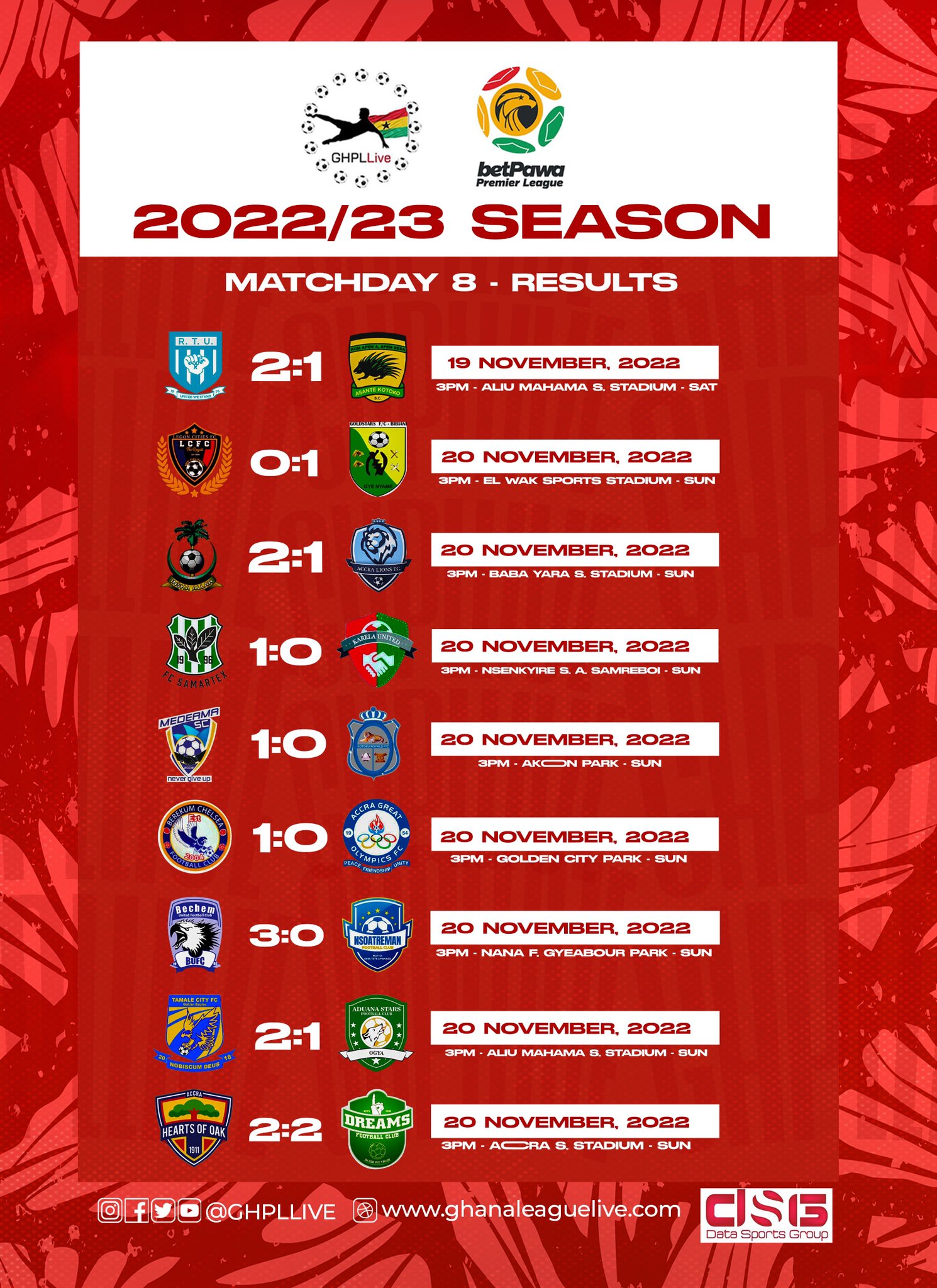 Prosper Boakye Owusu put smiles on the face of Medeama fans as he scored late to earn them a 1-0 win over Akyem Oda Kotoku Royals at the Akoon Park in Tarkwa. The towering midfielder smashed home the match winner inside 94 minutes to give the home side only their third win of the season and their first at home since Matchday two.

At the Fosu Gyeabuor Park Bechem United were simply unstoppable as they pummeled Nsoatreman FC 3-0 at home. Youngster Cephas Mantey scored a hat-trick to hand his side the spoils in front of the partisan crowd. The striker netted in the 3 , 4 and 15 minutes of the encounter to win the day for the Hunters.

Berekum Chelsea rallied to beat Accra Great Olympics 1-0 at the Golden City Park. Mezack Afriyie scored his 7 goal of the season to give his side all the spoils at home.

Sampson Eduku and Isaac Mensah found the back of the net as Tamale City turn around to beat League leaders Aduana FC 2-1 at the Aliu Mahama stadium. The home side conceded first in the 55 as Bright Adjei scored an absolute stunner much to the surprise of the home fans. Sampson Eduku then equalized for the home team in the 76 minute before Isaac Mensah converted a spot kick in the 86 minute to hand Tamale City their first win of the season.

In the Western derby, Abubakar Seidu scored in the 36 minute as Samartex FC beat Karela United 1-0 at the Nsenkyire complex at Sameraboi.

Finally on Saturday, Real Tamale United came from behind to beat Champions Asante Kotoko 2-1 at the Aliu Mahama stadium. Georges Mfegue opened the scoring for the Porcupine Warriors but it wasn’t enough to give them victory as Real Tamale United crawled back to win the encounter. The Northern giants scored two quick fire goals through Issah Kuka and Dabvid Abagna in the 64 and 65 minutes respectively.

The Ghana Premier League will resume in December because of the FIFA World Cup Qatar 2022 tournament which kicked off in Doha on Sunday, November 20, 2022. 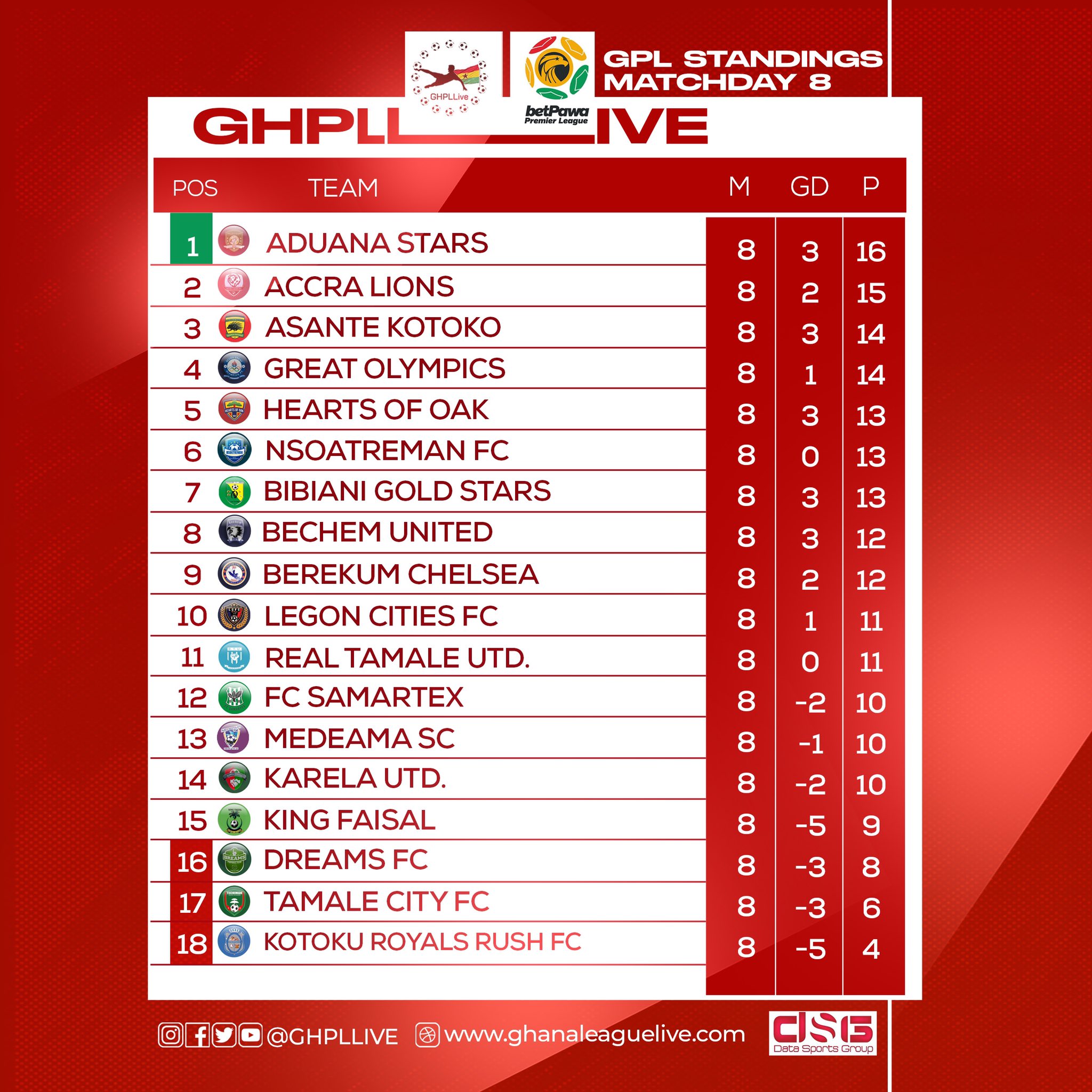