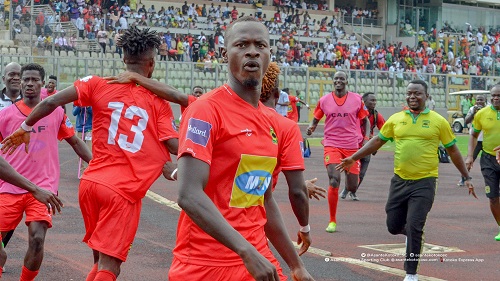 Substitute Naby Keita became the hero of the day as he scored the all-important goal for Asante Kotoko in their 1-0 win over San Pedro at the Baba Yara Sports Stadium.

The Guinean international scored from the spot with the last kick of the match to a hand the Porcupines a major boost heading into the second leg in Abidjan.

The game was rescheduled for today but only the second 45 minutes was played.

Coach Kjetil Zacharissen named an unchanged line up for this for the second half of the as Black Stars goalkeeper Felix Annan in the post with S. Ayiku and Patrick Yeboah on the right and left flanks.

Agyemang Badu partner Empem Dacosta as center backs while Emmanuel Gyamfi and Augustine Okrah operated from the flanks with Collins Ameyaw and Justice Blay in the middle.

Richard Arthur and Songne Yacouba lead the attack for the Reds.

Kotoko began the match with intensity looking for a goal as they wanted an advantage over the Ivorian side.

Richard Arthur thought he had found the breakthrough for the Porcupines only for South African referee Eugene Nkosinathi Mdlule to disallow the goal as he was deemed to be in an offside position.

Midfielder Collins Ameyaw made way for Naby Keita to add more bite in attack. He nearly put Kotoko ahead just minutes after coming on only for his effort at goal to be blocked for a corner kick.

Coach Kjetil Zachariassen and his charges won a penalty at the last minute of the game which Naby Keita scored to make it 1-0 to Kotoko.