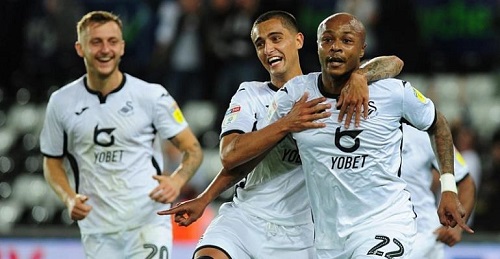 Swansea City boss, Steve Cooper hailed the impact of substitute Andre Ayew who helped his outfit come from behind to beat Northampton in the Carabao Cup.

Swansea fought back to avoid a first-round Carabao Cup upset as they beat the League Two side.

The English Championship side went 1-0 down as Matt Warburton gave the League Two side a shock lead just after the hour mark in the first round encounter at the Liberty Stadium.

But the Ghana skipper climbed off the bench to make his first appearance for the club in 15 months and scored twice - with George Byers also netting - as Swansea booked their place in the second round.

That was Ayew's first goals for the club since May 2016.

"That's exactly what we know he can do.

"He's come back into the club after the international break in very good condition, he looks extremely motivated in training and tonight was about giving him the right amount of minutes to help him get right back up to the fitness levels to play in the league campaign.

"A positive night in a number of ways with his inclusion."

Swansea win sees them progress to the next stage of the competition where they will host Cambridge United on August 26 at the Liberty Stadium.