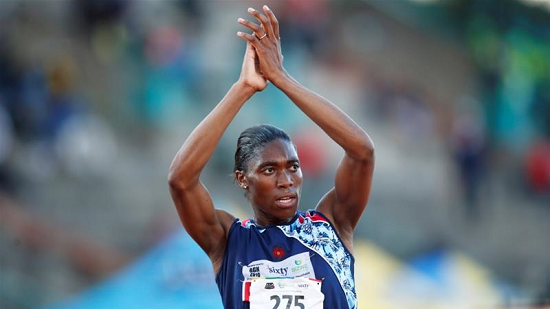 Caster Semenya will be allowed to compete in races of all distances without medication to limit her testosterone levels after a successful appeal against the recent IAAF ruling.

Semenya has won her appeal against the controversial IAAF change which required her to use medication to lower her testosterone levels in 400m to 1500m races.

The South African athlete, who has naturally elevated testosterone levels as a result of a condition called hyperandrogenism, lost a landmark legal case against the IAAF last month.
She challenged their proposal to restrict testostrone levels in female athletes in events between 400m and a mile but lost out when the decision was taken to the Court of Arbitration for Sport in Lausanne, Switzerland last month.
Yet the Supreme Court of Switzerland have now suspended the regulations with the IAAF given until June 25 to respond as the situation rumbles on.

A statement said: "The Federal Supreme Court of Switzerland has ordered the IAAF to immediately suspend the implementation of the eligibility regulations against Caster Semenya, allowing her to compete without restriction in the female category whilst her appeal is pending.
"The Swiss Supreme Court will issue another ruling on the continued suspension of the IAAF Regulations after receiving submissions from the IAAF."
Semenya stated: "I am thankful to the Swiss judges for this decision. I hope that following my appeal I will once again be able to run free."

After losing out in her legal case last month, Semenya claimed she was specifically targeted by the regulations and would not let the move hold her back.

She said: "'I know that the IAAF's regulations have always targeted me specifically.

"For a decade the IAAF has tried to slow me down, but this has actually made me stronger. The decision of the CAS will not hold me back.

"I will once again rise above and continue to inspire young women and athletes in South Africa and around the world."

But CAS said in a statement: "By majority, the CAS panel has dismissed the requests for arbitration considering that the claimants were unable to establish that the DSD regulations were 'invalid'.

"The panel found that the DSD regulations are discriminatory, but the majority of the panel found that, on the basis of the evidence submitted by the parties, such discrimination is a necessary, reasonable and proportionate means of achieving the IAAF's aim of preserving the integrity of female athletics in the restricted events."

However, despite the award in favour of the IAAF, CAS said its panel "expressed some serious concerns as to the future practical application" of the DSD regulations.
READ ALSO: