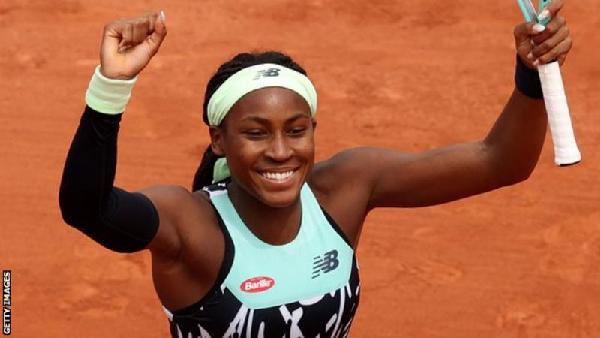 Coco Gauff says she has shaken off the pressure she felt as a 15-year-old and is ready to win a first Grand Slam against heavy favourite Iga Swiatek in the French Open final.

Gauff first broke through by reaching the Wimbledon fourth round in 2019.

The 18-year-old says her change in perspective will help her try to end Swiatek's superb 34-match unbeaten run.

"I always wanted to play her in a final - I just didn't think it would happen so soon," American Gauff said.

Swiatek, champion in Paris in 2020, is the overwhelming favourite at Roland Garros, having won the past eight finals she has played in and claimed five successive titles this year alone.

However, Gauff has yet to drop a set in this year's tournament and has spent the past three years building on her eye-catching performances at Wimbledon.

Since beating Venus Williams at SW19 on her Grand Slam main draw debut, Gauff has enjoyed a steady rise up the rankings and claimed some notable wins, including ending Naomi Osaka's title defence at the 2020 Australian Open.

Swiatek and Gauff will meet on Court Philippe Chatrier from 14:00 BST on Saturday, with live text and radio commentary available on the BBC Sport website and app.

This version of me is ready to win a Slam - Gauff

Gauff is bidding to become the youngest American to win a Grand Slam since Serena Williams lifted the US Open trophy in 1999.

Her Wimbledon run caught the attention of the public, with former First Lady Michelle Obama and singer Beyonce's mum posting about her on social media.

On the eve of the final, Gauff spoke openly about how she "wanted to win too much" during that time, which led to her putting "way too much pressure" on herself.

"I think there's a fine line between believing in yourself and almost pushing yourself too much," said Gauff, who won the 2018 junior title at Roland Garros.

"If I do lift the trophy, honestly, I don't think my life is going to change really.

"The people who love me are still going to love me regardless if I lift the trophy or not."

Gauff is known for speaking out for social change, including calling for an end to gun violence in America after her semi-final win over Martina Trevisan.

She credited her family and those around her with helping her to look at life beyond tennis.

"Talking to my family in general, my grandmother is always like there is more to life than this.

"Since I was younger my dad told me I could change the world with my racquet. He didn't mean that by just playing tennis. He meant speaking out on issues like this."

Swiatek has become one of the best front-runners on the tour, having broken her opponent's service in their first service game in all six of her matches in Paris.

She often overwhelms her opponents through her sheer power, most notably at last year's Italian Open when she thrashed Karolina Pliskova 6-0 6-0 in just 45 minutes.

Victory in the final will mean Swiatek will draw level with Venus Williams for the longest winning streak on the WTA Tour in the 21st century.

"I want to start with being proactive and put pressure on my opponents because I know how it feels," Swiatek told BBC Sport.

"I try to be aware that my opponent is also going to be stressed and realise that I have nothing to lose."

Swiatek, who turned 21 earlier this week, has said she believes Gauff could be a rival for years to come.

The two met earlier this year at Miami Open, with Swiatek winning in straight sets.

"I'm pretty happy that she's doing well, because I think she's also had a huge amount of pressure in her life," Swiatek said of her opponent.