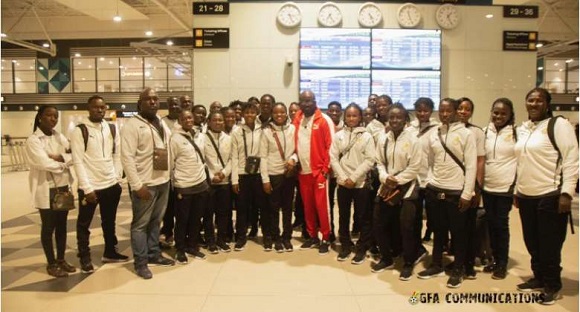 President of the Ghana Football Association, Kurt Okraku, was at the Kotoko International Airport to see off the Black Princesses team as they head to France to continue preparations ahead of the FIFA U20 Women's World Cup.

The team has been preparing in Ghana for almost a month, but leave for Paris to put final touches to their training ahead of Costa Rica 2022.

Kurt Okraku spoke to the team, inspiring them to go out there and make history for the country.

"It's been many weeks of hard work, waiting and you all dreaming of playing at the highest level of football in your category. Now the waiting is over, it's time to be very focused for the last leg," he said.

"As you leave Ghana for France to continue the long journey to Costa Rica. I am sure it is a journey each of you have been waiting for," he added.

"From your individual clubs, you were picked to represent the country and now is the moment. We have been on this journey before but we always exit at the group stage. But I believe we have a group of talented players who have the capacity to go and make history."

Ghana have been drawn in Group D of the FIFA Women's U20 Women's World Cup alongside Japan, the Netherlands and the United States.

The tournament begins on August 10 and ends on the 28th of August.