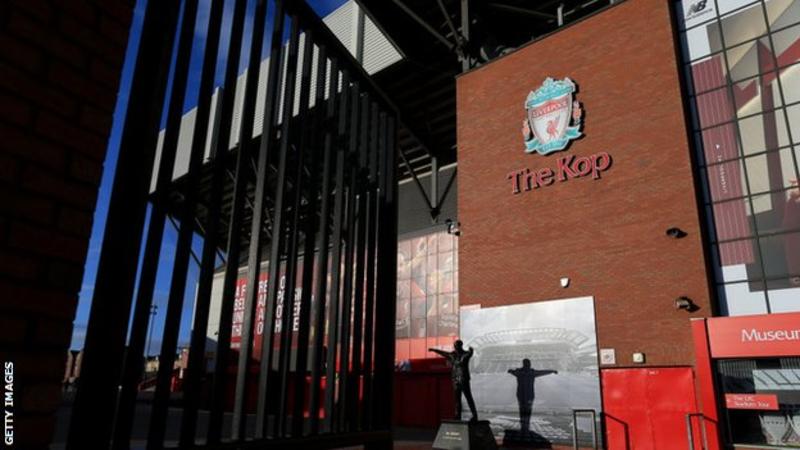 Liverpool have reversed their decision to place some non-playing staff on temporary leave and apologised to fans.

On Saturday, the club said they were going to apply to the government's taxpayer-funded job retention scheme, sparking a fierce backlash.

But in a letter to their fans, chief executive Peter Moore said: "We believe we came to the wrong conclusion last week and are truly sorry for that."

He added that the Reds have "opted to find alternative means" to pay staff.

The U-turn came after mounting criticism had led to talks between the club's US owners Fenway Sports Group, executives and key stakeholders.

Liverpool had become the fifth Premier League team to furlough non-playing staff with the season suspended indefinitely because of the coronavirus pandemic.

Staff affected were to receive 80% of their salary through the scheme and the club would make up the difference, despite making a profit of Â£42m last year. Liverpool are the world's seventh-richest football club.

The decision was criticised by former Liverpool players Jamie Carragher and Stan Collymore.

"Despite the fact we were in a healthy position prior to this crisis, our revenues have been shut off yet our outgoings remain," said Moore.

"And like almost every sector of society, there is great uncertainty and concern over our present and future.

"Like any responsible employer concerned for its workers in the current situation, the club continues to prepare for a range of different scenarios, around when football can return to operating as it did before the pandemic.

"These scenarios range from best case to worst, and everything in between.

"It is an unavoidable truth that several of these scenarios involve a massive downturn in revenue, with correspondingly unprecedented operating losses.

"Having these vital financial resources so profoundly impacted would obviously negatively affect our ability to operate as we previously have."

Gareth Roberts, from the Anfield Wrap podcast, told BBC Radio 5 Live that the club may have made the original decision "without thinking about the ramifications", but eventually "common sense had prevailed".

He added: "It just felt wrong and I know Liverpool qualified for the government's job retention scheme. It boiled down to morals for me and we expect more from football clubs than other businesses because we are emotionally part of the club - it is something we support and put a lot of our money and time and effort into.

"In the statement they put out they are talking about revenues possibly going down without months of football. That is going to be a reality for all of football.

"They just hadn't viably consulted on it. There are plenty of people at the club who would have been opposed to it and it feels like someone, maybe at the very top of the club, made the decision without thinking about the ramifications and what it looked like reputation-wise.

"They have seen the mass reaction and decided to reverse that decision. Common sense has prevailed in the end."

Ex-defender Carragher had tweeted: "Jurgen Klopp showed compassion for all at the start of this pandemic, senior players heavily involved in Premier League players taking wage cuts. Then all that respect and goodwill is lost - poor this, LFC."

Former striker Collymore posted on social media: "I don't know of any Liverpool fan of any standing that won't be anything other than disgusted at the club for furloughing staff. It's just plain wrong."