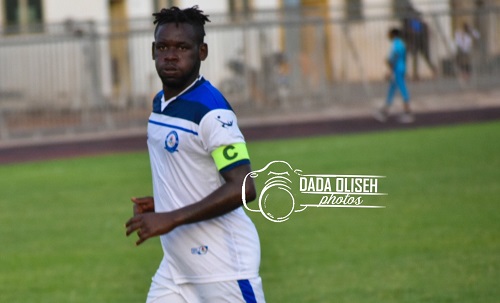 Great Olympics captain Emmanuel Clottey says the team is behind interim head coach Seth Hoffman and they trust him to do big things.

Olympics don't have a substantive coach after Prince George Koffie resigned after week 7 when they lost to WAFA at the Accra Sports Stadium.

According to Koffie, he resigned after the Wonder Club fans threatened, assaulted him and his wife.

READ ALSO:Â Olympics game is a special match but only 3pts at stake - Legon Cities coach

Interim coach Seff Hoffman has been in charge of only two matches, winning one and losing the other.

He guided the team to beat struggling King Faisal 4-3 and suffered a home defeat to Eleven Wonders but Clottey believes Hoffman has what it takes to get the Olympics team going.

"I think Hoffman is a very good coach and he will help us. I get this feeling when I look at his training sessions and I believe he will help us," said Clottey.

"He has had to take over as head coach and so, we will need time to understand his way of playing the game but we cannot take all the time to do that.

"We are comfortable with him and we know what he can do and so, we need to take our training sessions seriously and we will see how things go."

Great OlympicsÂ will be locking horns with the Legon Cities on Friday, February 14 at the Accra Sports Stadium in the Ghana Premier League matchday 10 encounter.