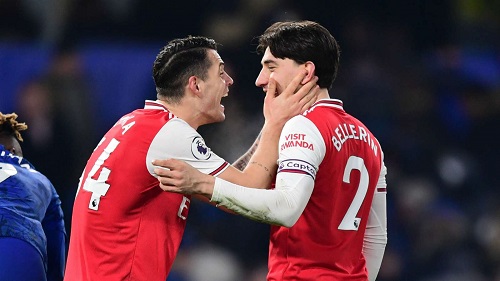 10-man Arsenal held Chelsea to a pulsating scoring draw at the Stamford Bridge on Tuesday night.

The visitors had to twice come behind to earn a point in their 2-2 stalemate with Chelsea. The Blues took the lead from the penalty spot after Tammy Abraham was brought down by David Luiz in the box which resulted in the latter being red carded.

Jorginho made no mistake from the resulting kick as he put Chelsea ahead in the 28th minute mark. They held onto the lead to half time.

However, Arsenal pegged them back 18 minutes into the second half courtesy Brazilian attacker Gabriel Martinelli. The youngster went on a solo run through the Blues backline before slotting the ball past Kepa Arrizabalaga.

Chelsea's captain thought he has won the contest for his side when he regained their lead in the 84th minute after connecting home from Callum Hudson Odoi's cross.

But Arsenal refused to go home without a fight and they drew the equaliser 3 minutes from time when Hector Bellerin capitalised on a poor defending to slot home as the match ended 2-2.

Elsewhere, Manchester City had to rely Sergio Aguero to bail the out his outfit as Sheffield United were frustrating them. The Argentine climbed off the bench to recuse a win for Man City following his second half strike after Gabriel Jesus had failed to put the Citizens ahead from the penalty spot in the first half.