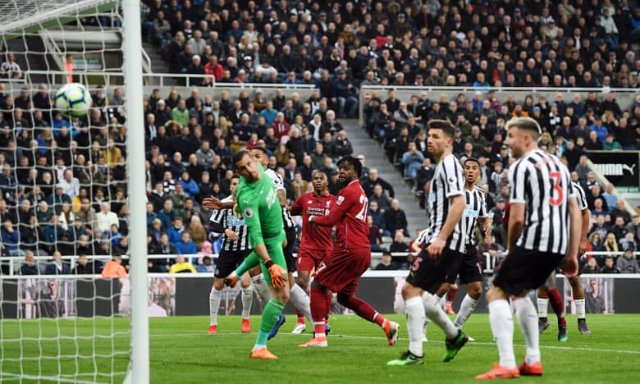 Divock Origi's late winner sent Liverpool back to the top of the Premier League with victory at Newcastle United to put the pressure back on Manchester City and ensure the title race will go to the final game.

Origi - on as substitute for Mohamed Salah after he was taken off on a stretcher with a head injury sustained in a collision with Newcastle keeper Martin Dubravka - headed in Xherdan Shaqiri's free-kick in the 86th minute.

It gave Liverpool three points after a topsy-turvy night on Tyneside.

Now Manchester City must beat Leicester City at Etihad Stadium on Monday to ensure they retain the initiative going into the final round of games next Sunday.

Liverpool went ahead after 13 minutes when Virgil van Dijk arrived unmarked on the end of Trent Alexander-Arnold's free-kick.

Newcastle were quickly level when Christian Atsu scored from close range after Alexander-Arnold handled Salomon Rondon's shot on the line but Salah took advantage of more poor marking to volley home another fine delivery from the young defender.

Rondon, a handful all night, drew Newcastle level once more nine minutes after the break when Liverpool failed to clear a corner and Jurgen Klopp's side suffered another blow when Salah was taken off after a lengthy delay.

Origi was introduced and made the decisive contribution that keeps the title race alive - although Salah's injury is a worry with Liverpool attempting to claw back a 3-0 deficit against Barcelona in the Champions League semi-final second leg at Anfield on Tuesday.