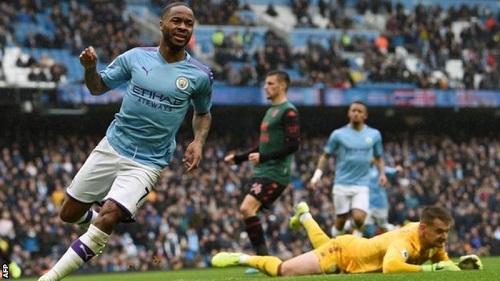 Manchester City cut Liverpool's lead at the top of the Premier League table to three points after seeing off a determined Aston Villa side with three second-half goals.

Liverpool can restore their six-point advantage if they beat Tottenham on Sunday but, after dropping points last weekend, the Reds go into that game knowing they have the defending champions breathing down their neck.

But while this ended up being a routine win for Pep Guardiola's side, they had to work hard and wait to break down a well-organised Villa side.

The visitors had largely frustrated City in the first half but their resistance lasted for only 20 seconds after the restart.

After Villa squandered possession from their own kick-off, Ederson's long punt forward was flicked on by Gabriel Jesus and into the path of Sterling, who made no mistake.

Jesus should have made it 2-0 soon afterwards when a mistake by Bjorn Engels left him clean through, but a combination of a Tom Heaton save and a brilliant goal-line clearance by Tyrone Mings denied him.

City had to wait until the 65th minute for their second goal, which was eventually awarded to Kevin de Bruyne after a long delay for a VAR decision.

It was unclear at first glance whether David Silva or Raheem Sterling, who would have been offside from a Silva touch, had got a deflection on De Bruyne's wicked curling cross but it was ruled it had gone straight in and was allowed to stand.

Ilkay Gundogan made absolutely sure of the points a few moments later, when Fernandinho's shot was cleared into his path, and he expertly adjusted his body to put away a fine first-time finish.

The hosts finished the game with 10 men after Fernandinho was shown a second yellow card.