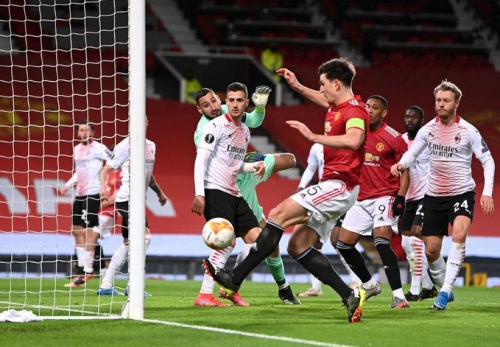 The half-time substitute found the net with a brilliant backward header just five minutes after his introduction to give Ole Gunnar Solskjaerâ€™s side the lead. But Simon Kjaerâ€™s headed equaliser in added time earned Milan the point and away goal that their performance certainly deserved.

The first half, dominated by Milan, was a tale of goals that could and maybe should have been. The visitors thought theyâ€™d gone ahead when Franck Kessieâ€™s expertly-struck effort from the edge of the box flew past Dean Henderson in the United goal, only for VAR to spot a questionable hand ball and rule it out. And Stefano Pioloâ€™s side created a host more half-chances before the interval as they opened United up time and again.

However, for all of Milanâ€™s dominance it was United who had the biggest chance in the remainder of the first half, with Harry Maguire producing one of the most remarkable misses of the season as he struck the post when completely unmarked and just a yard out.

United, inspired by Dialloâ€™s header, were better after the break and could have added another had Daniel James managed to sort his feet out and finish into an empty net from Mason Greenwoodâ€™s cross.

But Milan continued to impress, with Kessie pulling the strings, and Kjaer got the goal that their efforts merited to leave the tie in the balance.

The second leg in Milan will be played in a weekâ€™s time, with the draw for the quarterfinals to be held in Nyon the next day.