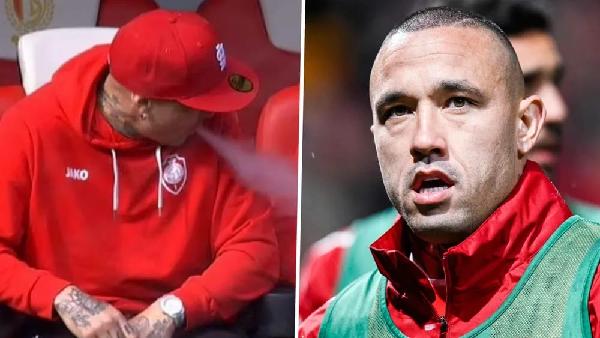 Former Inter and Roma midfielder Radja Nainggolan has been banned indefinitely by Royal Antwerp for smoking on the club’s bench.

The 34-year-old former Belgium international has been making plenty of unwanted headlines back in his homeland this season. Having recently been arrested for driving with an expired licence, Nainggolan was spotted using an e-cigarette ahead of Antwerp’s 3-0 defeat to Standard Liege on Sunday.

Royal Antwerp have said in a statement on the club’s official website: “RAFC today had a conversation with Radja Nainggolan about his general functioning and about how certain behaviors reflect on the club and the group of players. The club has decided to expel Radja from the A-team indefinitely. Clear agreements have also been made about what our club does and does not expect from its player. Neither player nor club will comment further on this.”

Nainggolan has responded to the ban by posting on Instagram: “The club has made a decision I can only accept, even though I think it might be a bit too severe for me. But I will try to contribute in one way or another.”

The combative midfielder, who has never shied away from his bad boy reputation, has previously told France Football of his off-field antics: “I can drink and smoke a cigarette with serenity. Even a footballer can smoke, even if they do not have a ‘normal’ job.”