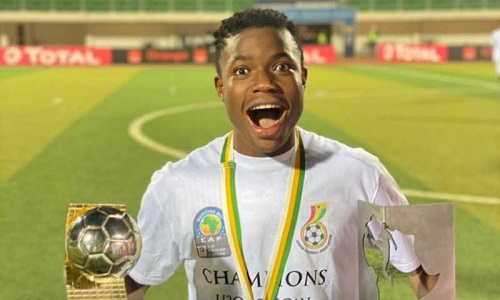 The youngster was chosen as Player of the Tournament after Ghanaâ€™s triumphant display at the just-ended U20 AFCON in Mauritania.

Following his exploits, the 16-year-old been drafted into the Black Stars B ahead of a friendly fixture with Uzbekistan whilst his teammatesÂ goalkeeper Danlad Ibrahim and right-back Philemon BaffourÂ have also earned call-ups to the Senior national team the Black Stars for AFCON 2021 qualifiers against South Africa and Sao Tome and Principe.

And the former coach has cautioned the trio against Complacency.

â€œIf you get a call-up it doesnâ€™t mean you are going to play, it is still part of the learning process," Manso said, as reported by Myjoyonline.

"Theyâ€™ve been drafted into the national team, now they are going to meet up with very experienced players and from there they will learn a lot from the training sessions, off the pitch and what goes on at the highest level.

â€œSo inviting them does not mean they are going to play for the Black Stars now. For me, the handlers have done well, and it will be a very good experience for the young players."

Issahaku, who captained Ghana at the 2021 U17 Wafu Cup of Nations earlier this year, has been linked to Swiss side Basel following his fine performances at the U20 championship.