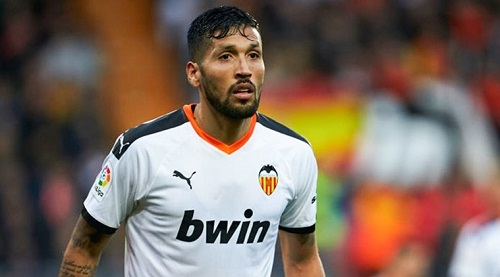 Valencia defender Ezequiel Garay is among five players and staff that have tested positive for coronavirus at the club.

Garay revealed he contracted the virus in an Instagram post on Sunday and has been in self-isolation since then. However, the La Liga outfit have released a statement that confirms the defender is one of five members of staff to contract the COVID-19 virus.

The La Liga outfit released a statement that read: 'Valencia CF inform that five positive cases of the COVID-19 coronavirus have been detected amongst first team staff and players. All of these persons are now at home, in good health and obeying self-isolation measures.'

The identity of the four other staff members has not been released.

The statement continued: 'Besides providing further information over the coming hours, the club reiterate our support for the health authorities and their social awareness campaigns, and emphasise to all of the population the importance of staying at home and continuing to follow the previously published hygiene and illness-prevention measures.'

The news on Sunday from Garay is the latest setback for the centre-back, who suffered a season-ending ACL injury against Celta Vigo in February.

Garay acknowledged his bad luck on his Instagram post but says he's now focused on recovering from both problems.

'Evidently my 2020 did not start well,' he wrote. 'I have tested positive for the coronavirus. I feel fine and now all I can do is listen to the health authorities, so I will self-isolate.'

There had been suggestions that Garay's illness was linked to Valencia's two games against Serie A side Atalanta, but those reports appear wide of the mark.

Atalanta is situated close to Bergamo, which is at the epicentre of Italy's coronavirus outbreak, but Garay didn't feature in either game against the club.

Spanish football has been postponed for at least the next two matchdays, while Real Madrid's entire team and staff are in self isolation.

Garay's injury and illness, meanwhile, have come at the worst possible time for the defender, whose contract at the Mestalla expires this summer.

The defender has made 23 appearances for the club this season but it remains to be seen whether Valencia offer him a new deal on the back of suffering a serious injury.