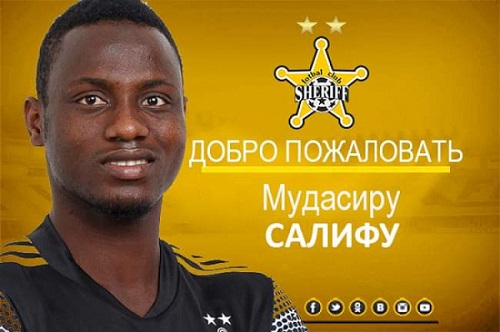 The 25-year-old has joined the Yellow and Black lads on a multi-year contract after passing a mandatory medical examination.

Mudasiru was born on April 1, 1997 in Kuasi. He spent his entire professional career in his homeland. For the last three years he played for Asante Kotoko FC, with whom he won gold medals in the Ghana Championship last season.

FC Sheriff staff is pleased to welcome Mudasira Salifa and wishes him success in our club's yellow and black shirt a club statement said."

He was handed a contract by FC Sheriff Tiraspol after impressing the technical handlers of the club during his trial period.

Mudasiru Salifu has been rated among the best midfielders in the Ghana Premier League following his exploits at Asante Kotoko for the past seasons.

He scored two goals in his 28 appearances for Asante Kotoko last season where he played an instrumental role in the Porcupine Warriors' league triumph.

Mudasiru Salifu was a member of the Black Galaxies of Ghana squad before leaving for Moldova.