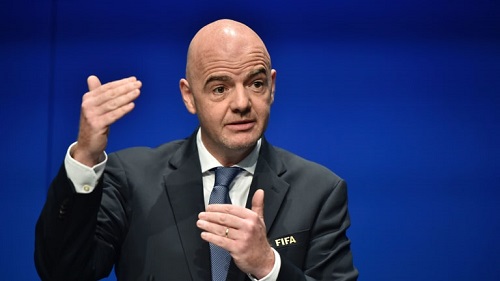 FIFA president Gianni Infantino has proposed that the Africa Cup of Nations (AFCON) be held every four years instead of every two and wants to create a pan-African Super League with 20 permanent member clubs.

The FIFA president, speaking at a seminar in Rabat on the development of African football, complained that football in the region had not progressed as expected and that he wanted to "project African football to the top of the world."

Infantino's remarks came less than one month after the Confederation of African Football decided to move next year's AFCON tournament in Cameroon from June-July back to its traditional January slot, prompting criticism from clubs who would have to release players at a key point in the season.

However, playing in June-July would have meant following on from FIFA's revamped Club World Cup in China.

"We have been talking about the development of African football for many years," said Infantino. "Pele once said that an African team would win the FIFA World Cup, but this hasn't happened and it seems we are not making progress. Today must be the day we turn that page.

"The (AFCON) generates twenty times less than the Euros (European championship). Having a CAN every two years, is that good at the commercial level? Has this developed the infrastructure? Think about spending it every four years."

Infantino then gave details of his proposal for a pan-African league which he said had been developed in conjunction with CAF.

"I want to create a real pan-African league that would feature 20-24 clubs with a maximum of maybe two clubs per country that would still play in their national leagues but that would play during the year so we can really crown the club champions of Africa," he said.

FIFA said in a statement that the permanent member clubs would be urged to provide an investment of $20 million annually over five years and would also have to meet other participation criteria such as investment in youth and women's football.

FIFA added the competition would have the potential to generate a revenue of $3 billion over a five-year cycle â€“ and would also create the conditions for African football to be able to retain some of most talented players on the continent.

CAF currently organises two continental competitions for clubs â€“ the CAF Champions League, for domestic champions plus runners-up from the bigger leagues, and the CAF Confederation Cup for lower-ranked teams.

Infantino also unveiled a plan to invest $1 billion to build "at least one top stadium" in each of Africa's 54 FIFA member associations. Where good stadiums already existed, the investment would be used on other infrastructure.

He also planned to set up a group of 20 referees who would be professionalised. "Referees have to be above and beyond doubt and to do that we have to protect them," he said.

"We will take 20 of the best African FIFA referees, professionalise them, and give them permanent, professional contracts."Â