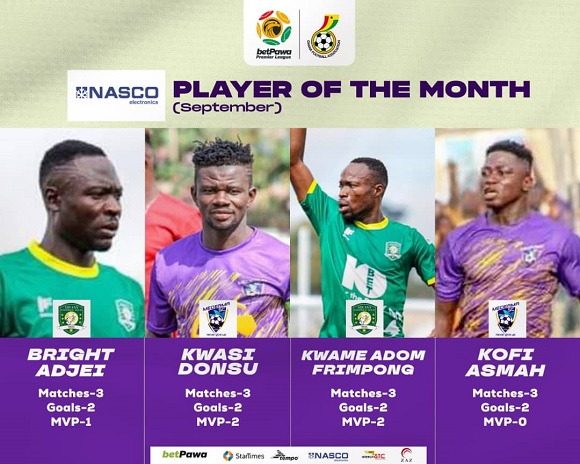 Four players have made the shortlist for the 2022/23 NASCO Player of the Month for the month of September.

Bright Adjei and Kwame Adom Frimpong, both from Aduana FC and Medeama duo Kwasi Donsu and Kofi Asmah have all been nominated for the monthly accolade.

The winner is set to receive a 43-inch NASCO Television set from Electroland Ghana Limited.

Winner for the award will be announced live on the next edition of the GFA News Bulletin.

READ ALSO: Shortlist for NASCO Coach of the Month of September announced

Meanwhile, the Ghana Football Association has put the Premier League on hold following a Motion on Notice for Injunction filed last Wednesday at the Human Rights High Court by Ashantigold SC and served on the GFA's lawyers.

Following the receipt of the Motion, the Association has decided to put the league on hold until the determination of a Motion on Notice for Injunction by the court on October 14, 2022.