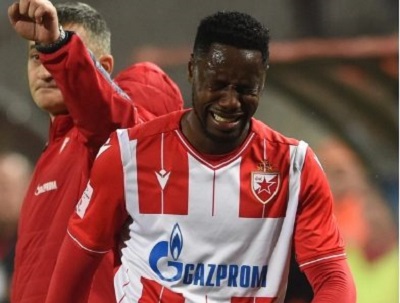 Ghana forward Richmond Boakye-Yiadom will not be part of the Black Stars squad to take on Sudan after suffering an injury.

The Red Star Belgrade attacker suffered the injury while playing for his outfit in their goalless stalemate againstÂ Partizan Belgrade on Sunday.

The Ghanaian international lasted only 34 minutes before being replaced byÂ Aleksa Vukanovic. According to reports, he will be spending a month on the treatment table.

The news comes as a blow to him as he was named inÂ C.K Akonnor's squad for the doubleheader against Sudan and was about to make a return to the senior national team of Ghana after a two-year absence.

Ghana will play Sudan on March 27 in Cape Coast before the second leg in Omdurman three days later.

Boakye-Yiadom has featured fourteen times for Ghana with 6 goals to his credit.