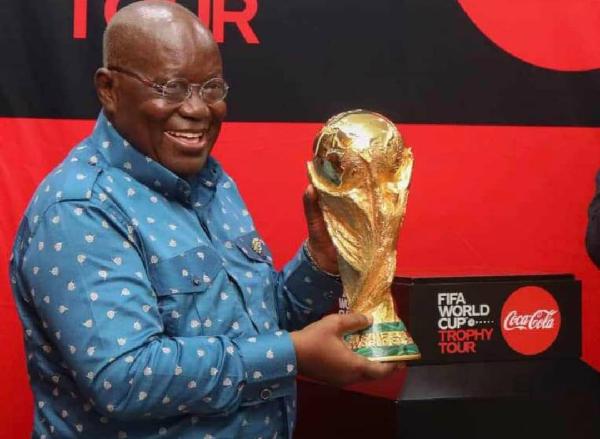 President Akufo-Addo believes Ghana will be the first African country to win the World Cup at this year's tournament in Qatar.

The President made this known in a speech read on his behalf by the Chief of Staff, Frema Osei Opare at a dinner held on Saturday night in Accra as part of a two-day tour by the World Cup trophy in the country.

"I am of the firm conviction that Ghana will not only participate in the competition but will make the whole nation and by extension the African continent proud, with a great performance," the President said.

"I, therefore, want to urge all Ghanaians, in conclusion, to throng the Accra Polo Court to view the trophy and to be part of history, before we finally bring the cup home on 18th December. We, who were the first to gain our freedom and independence from colonial rule, will be the first to bring the World Cup to Africa".

Ghana will face Uruguay, South Korea and Portugal in the group stages of the World Cup.
Ghana have scheduled pre-World Cup friendly games with Brazil and Nicaragua later this month before wrapping up with Switzerland in November.
Otto Addo is expected to name his squad for the friendlies against Brazil and Nicaragua by the middle of the month.
Mohammed Salisu, Inaki Williams, Tariq Lamptey are all expected to be named in the squad.