Government is a strategic partner in football development - Kurt Okraku 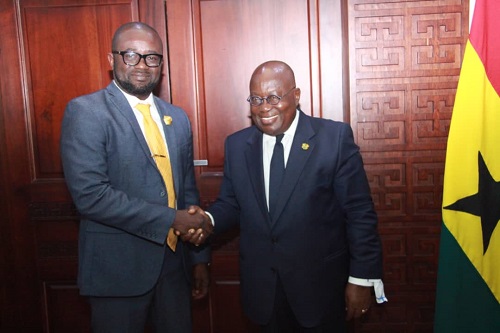 The President of the Ghana Football Association, Kurt Okraku has underlined the role and importance of government as a strategic partner for the development of football in the country.

READ ALSO: My main aim is to get fans to the various stadia - MND Jawula

"Government is a key partner for the development of sports in Ghana and for us at the GFA, when we talk about government, it is about building strong partnership with government agencies such as the NSA, the NYA, the Sports Ministry and many others," said Mr. Okraku.

"We can't achieve our objectives without the support and partnership of the NSA, and other key stakeholders and we want to assure you of our commitment to work with you," the GFA President added.

"Our presence here is a demonstration of our willingness to work with you."

Professor Twumasi also assured the GFA President and his team of the NSA's support for the benefit of the game.

After the opening exchange of pleasantries, the GFA and the NSA delved into issues of mutual concerns.

One of the key concerns the GFA President raised, was the issue of exorbitant deductions from gate proceeds on match days at NSA-owned stadia across the country.

The GFA President also raised concerns over how certain issues concerning the management of national team matches are handled between the GFA and the NSA, and called for a second look to ensure improvement in line with international best practice.

Responding, the NSA Chief Executive assured the GFA that his outfit is receptive to innovations by the GFA, which will be mutually beneficial to the two bodies, and ultimately Ghana football.