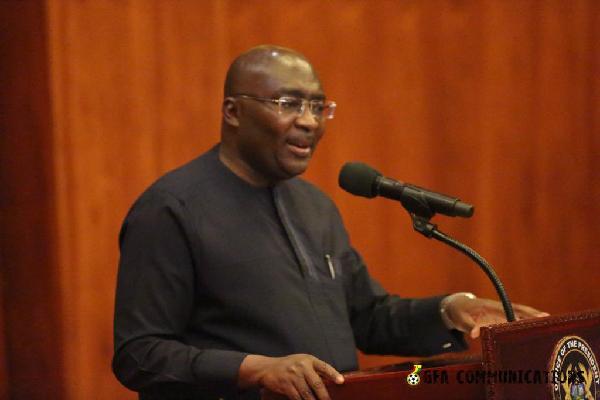 Vice President Dr. Mahamudu Bawumia has assured that the government of Ghana will provide all the needed support to help improve Women's football and to make the Black Princesses World Cup campaign a success.

He said this on Tuesday when he hosted the Black Princesses at the Jubilee House in Accra to officially congratulate them for making it to the World cup.

‘‘We are in a happy mood because we are here to congratulate you for making it to your sixth consecutive world cup. This is a remarkable feat and it has been said that the female team represented Ghana at the World Cup before the men did so in 2006. The women are setting the pace and the men have a lot of time to catch up’’ he said.

‘’You’ve had some tough matches along the way and I know that when you played Zambia, it wasn’t an easy match but you managed to win and met the Cranes of Uganda in the next round. That match was easy for you because it was a bit of a goal harvest when the aggregate score was 7:1.

‘’You ended the campaign by beating Ethiopia by a 5:1 aggregate so you have really gotten here not by luck but by a lot of teamwork and hard work and you deserve to be in the world cup. We are very proud of you as a country.

‘‘We are all going to support you including the Chief of Staff to go all out in the World Cup and I know that you will make us proud. I have this feeling that this time; you are going to make it beyond the group stage.

‘‘I want you to know that the government of Nana Addo Danquah Akufo Addo is one that is very committed to sport. We want to encourage and support you help develop women's football.

‘‘We are very much supportive to sport and to you as well. The President wants me to tell you that in recognition of your feat in qualifying for Costa Rica, he has prepared a special package for you which you will get through the minister of sports to deliver to you.

‘’Continue working as a team, Ghana is behind you, the President is behind you and we will all support you in Costa Rica to bring the cup’’

It will be recalled that the Princesses beat Ethiopia 5-1 in their last World Cup qualifier to book a place to their sixth consecutive World Cup in Costa Rica.