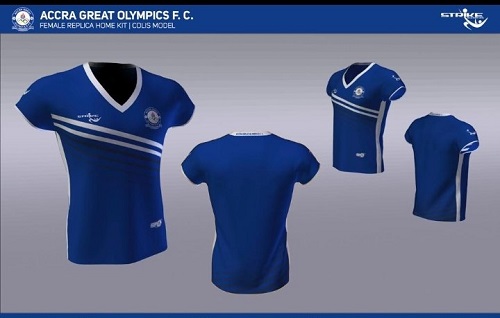 Great Olympics have announced that supporters who troop to the Accra Sports Stadium in the club's STRIKE jerseys will be allowed entry in their match against WAFA.

The 'Wonder Club' host the Academy side at WAFA at the Accra Sports Stadium on matchday 7 at 3:00 pm. As part of a bid to draw supporters to the stadium, the club has declared free entry for fans in their replica jersey produced by their kit manufacturers Strike.

A statement on the club's Twitter account read: ''It's a FREE ENTRY for our OLY fans & followers & sympathizers who come in their OLY STRIKE Jersey.''

...It's a FREE ENTRY for our OLY fans & followers & sympathizers who come in their OLY STRIKE Jersey.

After a poor start to the 2019/20 Ghana Premier League campaign, Olympics have been impressive in their last 3 games, picking up 2 wins and a draw.

They occupy the 11th place on the standings after the opening 6 games.