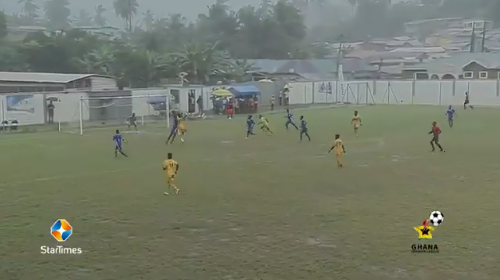 Great Olympics coach Annor Walker has attributed his outfit's defeat against Medeama to the soggy nature of the Akoon Park.

Olympics yesterday got beat by Medeama at the Akoon Park, Tarkwa in the final match of Ghana Premier League matchday 12.Â

Prince Opoku Agyemang's 20th-minute strike was enough to earn the Yellow and Mauves all three points at Akoon Park in Tarkwa.

Before the commencement of the game, the way a heavy downpour which left the pitch in bad taste. This Great Olympics boss said contributed to their loss.

"We came to prove a point but it is just unfortunate and you can see the football that we played and I attribute that also to that rain because what I expected or the way my boys played few weeks ago is not the way we played today due to the rain."

"... that's the most important thing whenever you are determined whether good or bad you have to make amends so we tried our possible best even though the one goal was not enough for us but because of the rains, it disturbed us a lot.

He added that he had to change their style of play from possession game to long searching balls due to the soggy nature of the pitch.

Olympics, meanwhile, sit one point above the relegation zone on the table due to yesterday's loss while Medeama climbed to the summit of the log by virtue of the win.